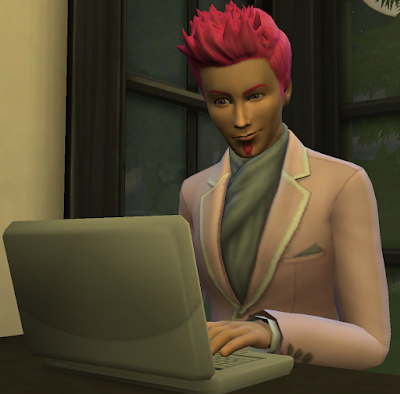 Since we last saw Johan, his career has really been taking off. He's been making waves through the fashion industry with his refreshing and bold ideas, earning him some promotions and setting him on the Trendsetter path, and as a means to boost his Writing skill for work, he now also has three published books under his belt: two style guides, and a romance novel about a flirty fashionisto who plays kiss-chase with everyone he meets.
(Wherever did he get that idea from?)
His long hours spent at his laptop in the local coffee shop granted him the opportunity to snog the barista, Malcolm Landgrabb... 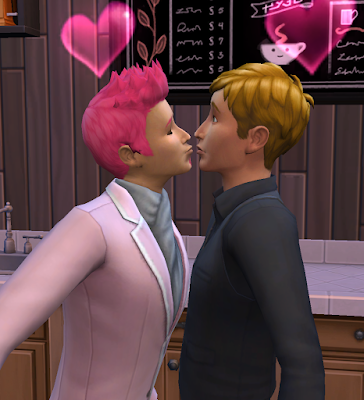 ...but now, Johan has more prestigious paramours in mind. Thanks to his photographs and style columns flooding the tabloids, and his romance novel being nominated for an award, Johan has become a minor celebrity, and has the opportunity to go to Del Sol Valley and lock lips with some really big names.
Heck, Johan's even becoming known in the art world. He's sold a couple of his paintings to collectors. 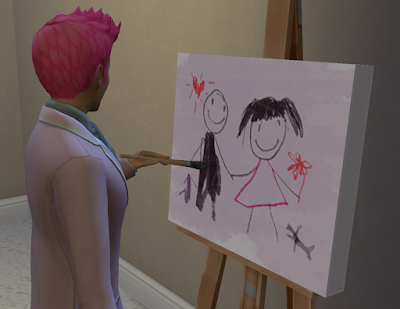 (No accounting for taste, I guess.)
On the night of the awards ceremony, Johan sadly comes away empty-handed. However, at the after-party for the lesser-known nominees at a Del Sol Valley lounge, he wins himself some consultation prizes in the forms of kisses.
After being snubbed by anyone with a Fame level, he starts his night of partying by snogging the Mixologist, Julia Wright. 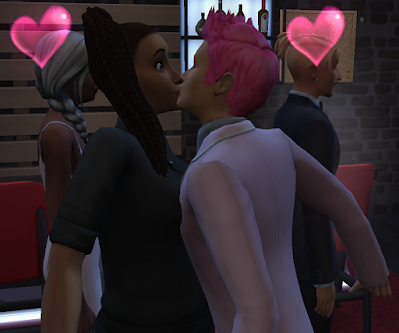 Next, he strikes up a chat with Allison Wahl, who happens to be a Fan of his novel. Soon, the pair are too busy using their lips for something else to keep on talking. 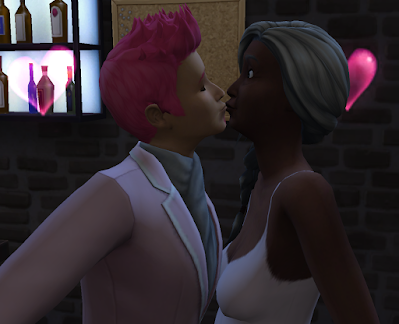 As the bell rings for last orders, the place is suddenly flooded by paparazzi - presumably stuffed with scandalous stories from the more renowned lounge across town, and now turning to the less famous revellers for table scraps. Johan seizes the chance to get his name in the papers, and after smooth-talking one of the charismatic cameramen, he scores himself a hat trick. 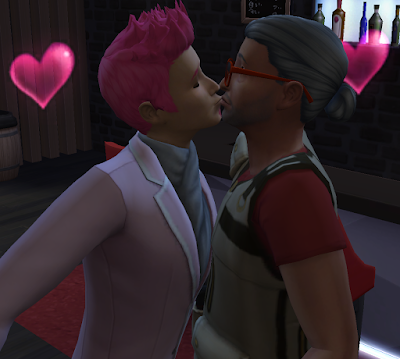 It's extremely late - or rather, early - by the time Johan stumbles back through his front door. As he snuggles down into his duvet to catch some shut-eye, a loud knock wakes him right back up. Mumbling various French curses, he staggers to the door and throws it open, and is greeted by the sharp-fanged smile of Lilith Vatore.
Normally, it's the vampire who seduces their victim, but Johan is no naive prey. Allowing Lilith to cross the threshold for some flirty conversation, she's soon sucking his face rather than his blood. 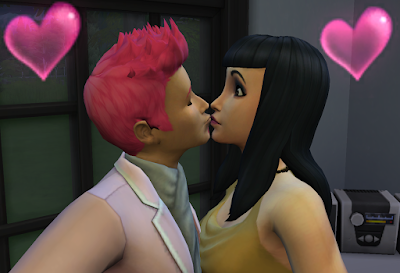 The morning brings about a change in Johan - but it's nothing to do with Lilith. His night hob-nobbing with the well-to-do has made him develop a quirk. He craves attention, and longs to be around celebrities. So, it's straight back to Del Sol Valley to get another fame fix.
Johan walks around the city streets in a haze, scanning every face he sees in the hope he'll recognise someone. Eventually, he comes across and butters up three different stars, leading to more lip-locks.
They are fellow author and B-lister Octavia Moon... 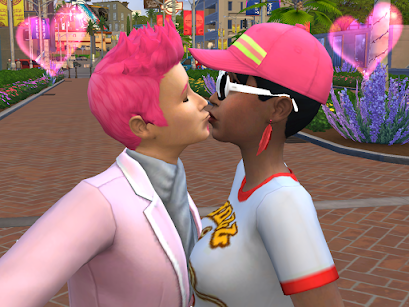 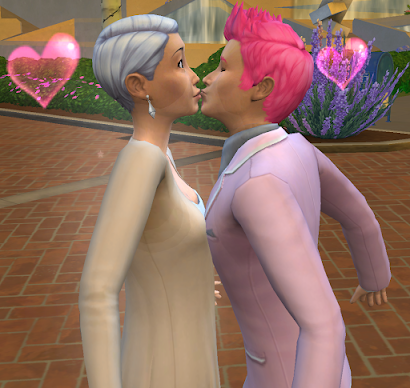 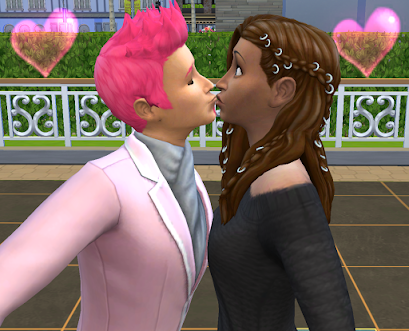 As he stands outside Del Sol Valley's hottest venue, frantically arguing/flirting with the bouncer to let him inside, one of the city's biggest names steps out - the musician Thorne Bailey.
Johan pesters him for an autograph, then goes on a charm offensive. With a crowd drawing around them, he convinces the beloved idol to give him a quick snog. 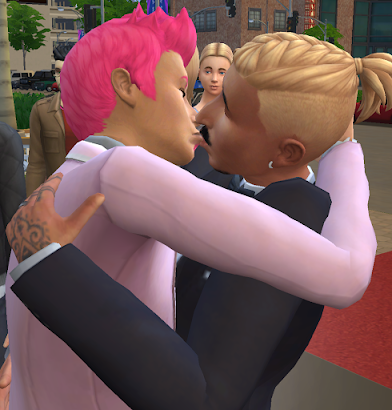 That evening, Johan celebrates his recent conquests with a slap-up meal at Magnolia Promenade's 5-star restaurant. By sweet-talking and smooching the hostess, Luna Villareal, he bags himself the best table in the joint. 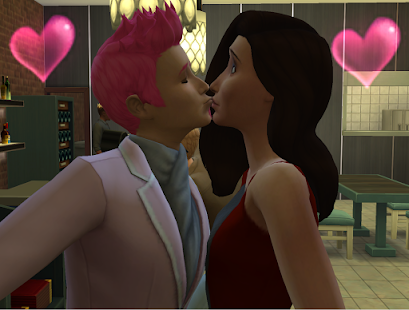 When he brings Johan his roast chicken and vegetables, waiter Christopher Richards receives more than a tip for his great service. 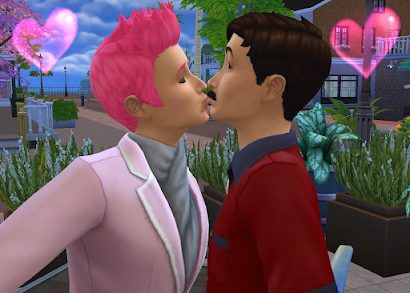 As he clears his plate, Johan's eyes - not to mention the eyes of everybody else in the restaurant, staff included - are immediately drawn to the newest arrival. Judith Ward - actress and Global Superstar - has just entered, with a veritable entourage of paparazzi in tow.
Johan knows he may not get a chance like this again. After dodging various bodyguards, he introduces himself to Judith - who, as it turns out, read and enjoyed his award-nominated romance novel. Seizing this mutually-known topic of conversation as a starting point, he fuels up every charismatic cell in his body, and soon lures this superstar in for a smooch - the flashing cameras of the paparazzi and a amused bartender spurring him on. 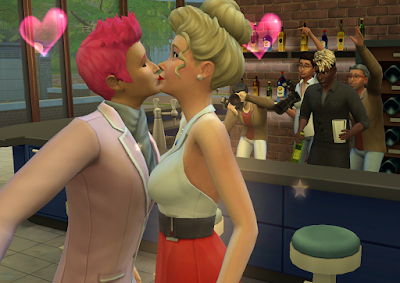 Johan's Fame Level skyrockets. The next morning, his photo is splashed across the front page of almost all the tabloids, and he dominates the headlines. "GLOBAL SUPERSTAR AND HER PINK-HAIRED PARAMOUR". "ACTRESS SNOGGED IN PUBLIC BY SNAPPY DRESSER".
Johan Bisou is quickly becoming the name on everybody's lips.
With any luck, soon his own lips will be on them too.
Total kiss count so far: 24
Posted by Little-Red-Hat at 03:47