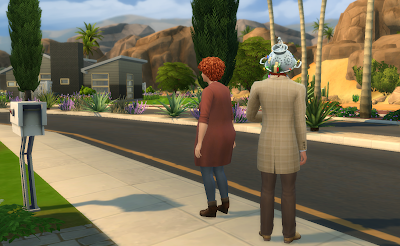 We rejoin the happy couple during a trip to Oasis Springs. Isaac has ventured back to the Pries homestead, asking his siblings and his father to meet him there so he can share some important news. Misty joins him, longing to meet the family, and to offer her husband emotional support.

Issac's hand trembles as he knocks on the door. When Erwin answers, he takes one look at his son, and beams from ear to ear.

He's going to be a grandfather! 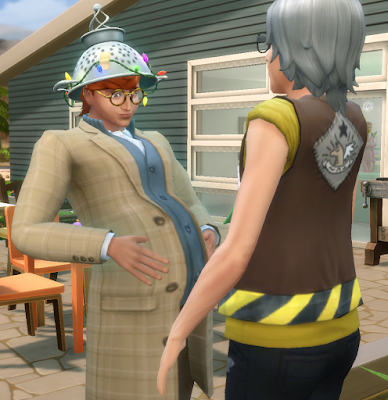 (To clarify, in my established Sims lore - The Miskin Legacy, Michael Lee Harker: Intergalactic Sim of Mystery, etc. - it is always the male who carries the baby in any kind of Sixamian pregnancy. If that works that way with abducted Sims, then I take it as read that it's the same for the species in general. Zara van Halen Miskin was an exception, but thus far, she has been a unique case, and technically speaking, she was assigned male at birth. Such pregnancies are possible without cheats thanks to the game's diverse gender options.)

Our current wearer of the Glowing Crown of Government Paranoia (a term coined by LuckyDucky, and one that made me laugh hysterically) is well into his second trimester by now, having become pregnant during one of several passionate intergalactic trysts with his new bride. 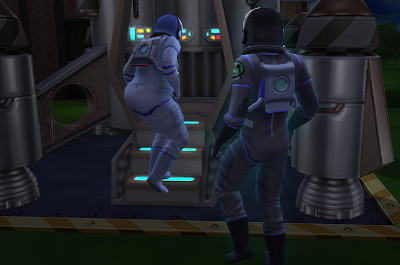 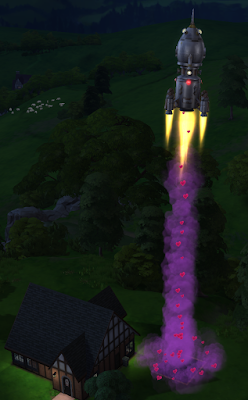 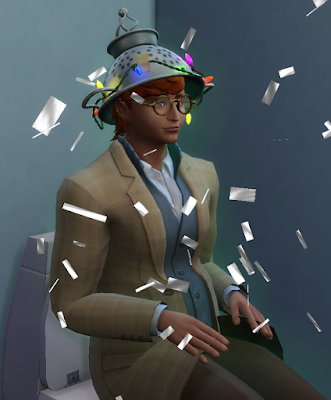 However, Issac hasn't used his delicate condition as an excuse to rest on his laurels. Determined to squeeze in a promotion or two before he's wheeled into the delivery room (and even then, he'll probably have an improving book open in his hands), he's taken up a regime of more relaxed, appropriate workouts, and spent the evenings working on his rocket. In short, the all-round agenda is "growth and development", in more ways than one. 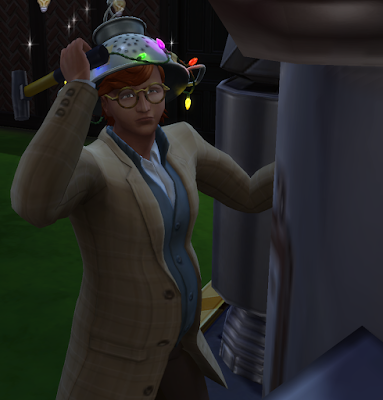 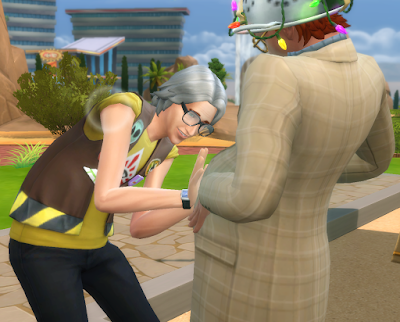 As soon as Erwin feels the little one's kicks, Isaac finds himself being passed around the Pries family like a plate of hors d'oevures - everyone taking their turn at putting their hands on his baby bump. 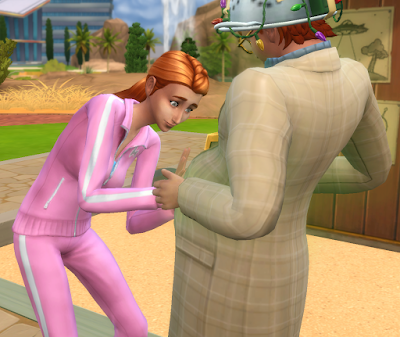 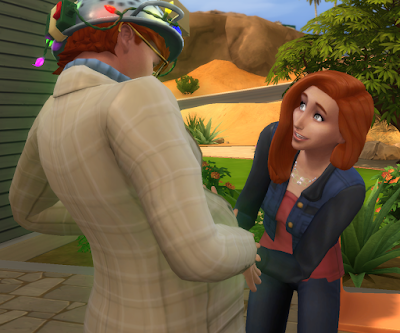 Lincoln is particularly intrigued, asking Isaac endless questions about his health. After all, if he ever falls in love, he may one day share his brother's fate!

(And that may well happen: I've selected Lincoln as the unofficial "heir presumptive" to the Pries dynasty, and he is the only sibling still living with Erwin in Oasis Springs, to ensure the house and land stay within the family.) 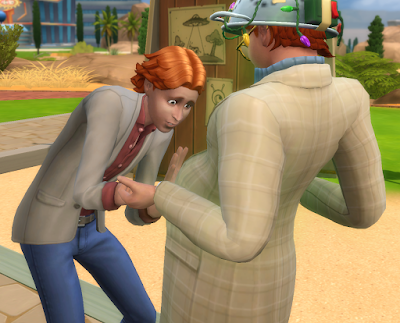 Isaac's visit is a brief one: Misty has taken up work at a fast food restaurant, and needs to get ready for her evening shift. Not to mention, Isaac relishes every moment he can get to prepare for the baby's arrival and advance his own career.

As Erwin gives his son a goodbye hug, he makes it clear how excited he is to meet his grandchild, and promises to be there at the birth - supporting Isaac through the whole ordeal as he stands at his side, along with his new daughter-in-law. 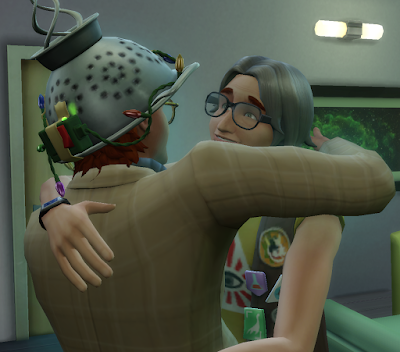 Sadly, Erwin's promise is one he won't keep.

Some time later, in the very early hours of the morning, Isaac - now in his third trimester, and the big day growing ever more imminent - is stirred out of sleep by his mobile phone ringing. As he answers and hears the news, his blood runs cold.

The speaker is a nurse from Oasis Springs Hospital.

Within the hour, a weeping Lincoln is at Isaac's door. 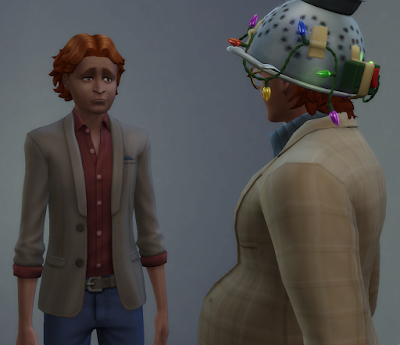 "It was a stroke," he explains. "It was all so sudden - totally unexpected. I wanted to call you right away, but Dad refused - he said he'd didn't want to cause you any stress, what with the baby's due date being so near. I was with him in the ambulance. They tried to save him, but..."

He breaks down, unable to finish the sentence. Shaking, but with a sense of duty, he hands Isaac a golden urn.

"He wants to be buried in Strangerville," he continues. "Later, once it's safe for aliens there. In his will, he asked for his remains to be placed in the care of you and your family, until the ceremony can be held. He said he didn't care how long he had to wait, as long as he got his wish someday."

After consoling Isaac and sharing a pot of coffee, Lincoln heads home - leaving each brother with their respective grief. No doubt Miranda and Cassie are hurting badly too.


Once alone, Isaac places his father's ashes in a prominent position: beside the lamp he received from him the day he became an adult. As he looks at it, the gold-plated urn glistening in the lamplight, he weeps bitterly. 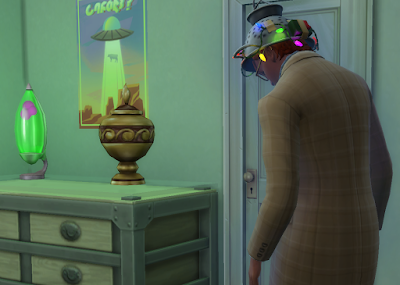 Dear Watcher, why now? He should still be alive. He should have been there to meet his grandchild. 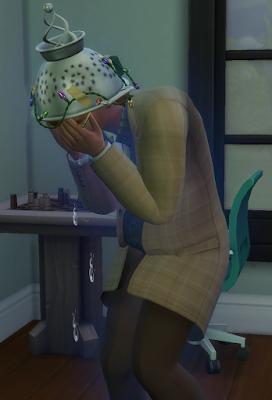 Misty does her best to console her husband. This is indeed a very sad time, but Isaac needs to look ahead to the future, and think about their baby. By all means, they should grieve for Erwin, but they mustn't allow sadness to spoil the happy event that is to come. Plus, Isaac should stay motivated and keep up his hard work. His father may have passed over, but he can still make him proud. 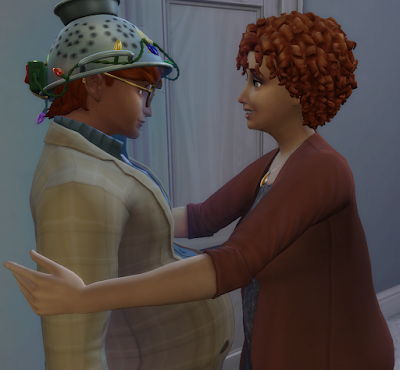 Isaac knows Misty is right. To distract himself, he plunges deeper into his work - getting up each morning, squeezing himself into his ever tightening suit, and helping to run various space missions from the Windenberg control room. 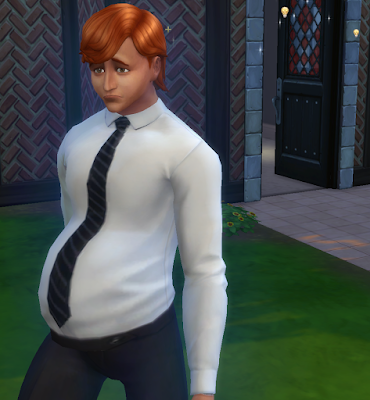 His devotion pays off. After months of effort, Isaac is finally accepted as a candidate for the astronaut program, and named as a Space Cadet. However, his rigorous training schedule is postponed until after the birth, for obvious reasons. 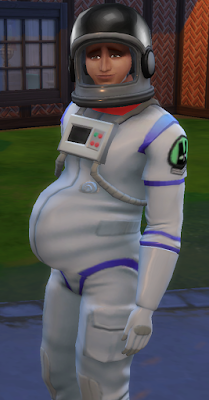 As for Misty, she uses her free hours during the day to satisfy her nesting instinct, and converts the spare room into a nursery.

Very soon afterwards, Isaac undergoes another rude awakening in the small hours. However, this time, the thing rumbling isn't his phone, but his belly. Waking up to a puddle on the mattress, and experiencing ever-more-frequent painful pangs, he swiftly realises that he's gone into labour.

Within minutes, they're on their way to the hospital - Misty holding her husband's hand tightly, reminding him to breathe.

As Issac, clad in a ducky-covered robe, lay on the bed of the Cesarean section machine in the delivery room, his eyes fall on the empty space beside him. 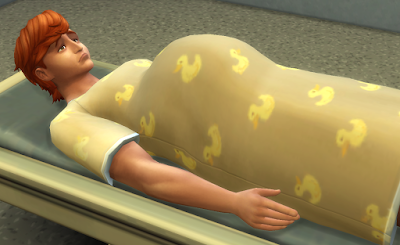 "That's where Dad should be," he says to himself.

He blinks back tears - but then reconsiders, allowing himself a small smile as he looks back at the space. Logic and science may rule his life, but he can still be open-minded about some things. Like the spirit world, for instance.

"Then again," Isaac thinks, "maybe he is here."

He can't dwell on the subject for long. As another contraction almost makes him bend double in agony, the doctor tells him that it's time for this baby to make its entrance.

As the moon rises again that evening, Genesis Pries is placed in her cradle by her adoring father. 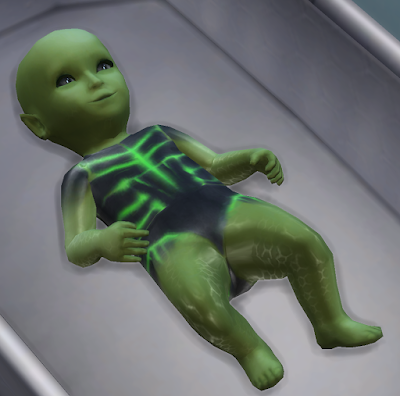 Inheriting his emerald skin, she is the most beautiful baby Isaac has ever seen. He utterly adores her - and Misty feels exactly the same way. Time will tell if she will be Isaac's heiress, but no matter what happens, she will always be treasured and loved. 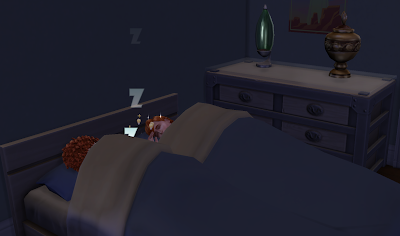 After some lullabies and goodnight kisses, Isaac and Misty retreat to their own bedroom - and enjoy a passionate loving celebration. Afterwards, as the astronaut's head hits the pillow, he drifts off to sleep satisfied - somehow knowing that Genesis won't be alone in the nursery for very long.

What he doesn't know is that she's not even alone right now... 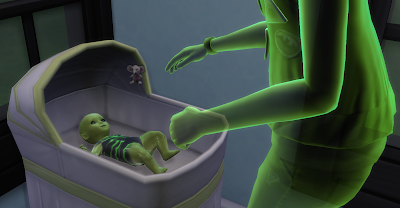 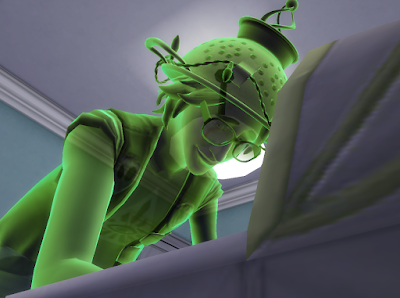