After their first meeting, the Campbells grew pretty close to the Crosswire-Sparx household. They always said hello to each other if they passed in the street, popped into one another's homes for chats and coffee, and often held parties where they invited one another to attend. 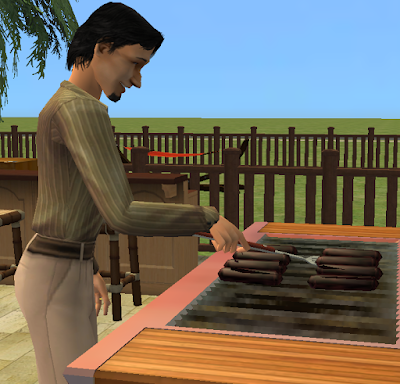 One summer, after James had purchased a new grill, he suggested to Theodora that they should hold a barbecue in their back yard. And so, on a fine August day, as her husband lovingly struggled with the charcoal and metal tongs, Theodora sat with Archie, Jack and Anna at their table on their lawn, making small talk as they awaited their food. 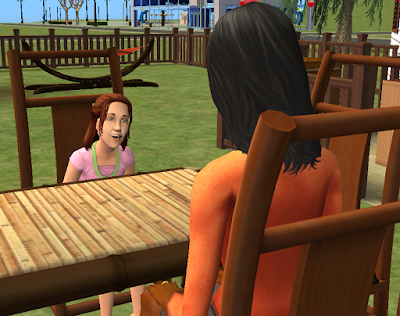 "So, Anna," Theodora began, "your dad tells me you're starting school next week. I bet you're excited."

As she said this, Archie and Jack turned to her with a sympathetic smile. 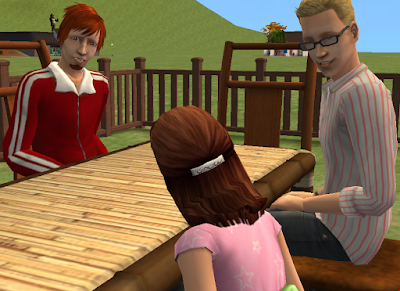 "I think we all are, really," Archie told her, reassuringly. "Your Uncle Jack and I have been talking about it a lot. But, you're a good girl. We're sure everything will be just fine. You'll make us proud."

"She sure will," Jack added. "She's an amazing girl. And her dad is the best role model she could have had."

As he heard Jack say this, Archie was sure he felt the gears inside him speed up slightly. What an unusual phenomenon. That had never happened to him before.

Theodora's eyes darted to her redheaded guest - a smirk spreading across her face. 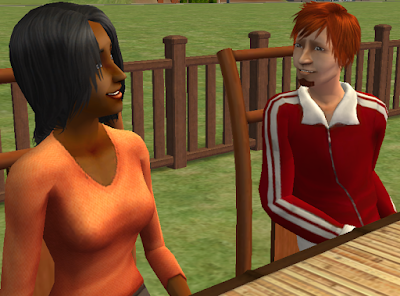 "Archie insisted," he told her dismissively.

That was true, but, all the same... Jack was glad he had done. He'd never claim the title of secondary father to Anna - he'd forfeited that right with his words and actions on the day she arrived in their liv... existences. Plus, he and Archie weren't a couple, so even "stepfather" wasn't viable. Besides, Archie was the sensible, responsible one, with the stronger sense of love - he was a far better father figure than he ever could be.

In the storybooks that Jack had overheard Archie reading to Anna over the years, it seemed that uncles were often wilder, more eccentric figures, who often sent their nieces and nephews into heaps of laughter, and brought back gifts from their exotic travels from places like Bora Bora - wherever that was.

Jack felt that this was more his style, more along his line. And so, he accepted the offered title of "Uncle" with greater pride than he'd ever let on to his housemate.

"Food's up," came a call from across the lawn. James, beaming with pride, was setting down a plate of rather burnt and blackened hot dogs onto a serving counter. 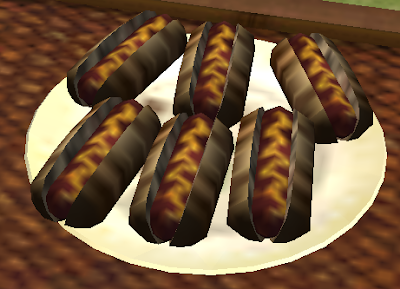 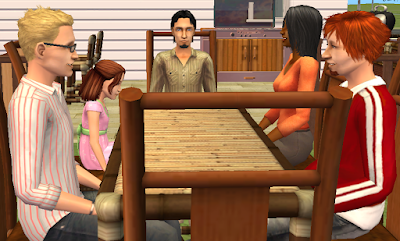 As James came to join them at the table, Theodora looked over at the fruits of his labour and bravely summoned up a loving smile.

"That looks... delicious, darling," she remarked. "Thank you."

Archie and Jack expressed their own gratitude, but deep down, they were relieved. At least now, they had an excuse not to eat in their neighbours' company.

Them missing a meal wouldn't trouble Anna. In recent months, she had noticed her father and uncle's unusual habits, and had started asking questions. In the end, Archie had sat her down, and told her the truth about everything - about how he and Jack were really robots, but she was human, and how she had been left on their doorstep as a baby one dark night. Their love for her, however, he'd insisted, was genuine, and not just a result of their programming. At the core, they were the same as any other caring, tight-knit family.

(He'd delicately chosen to avoid the matter of Professor Crosswire and Dr. Sparx, and their untimely end. If that sinister subject was ever to be discussed, it could wait until Anna had grown up.)

Anna had accepted all of this with grace, gratitude and understanding. Above all, she knew it had to remain a secret.

Still, Archie was all too aware that Anna starting school might be the greatest trial that his and Jack's illusion of humanity had ever faced. He could only hope that things would go smoothly. 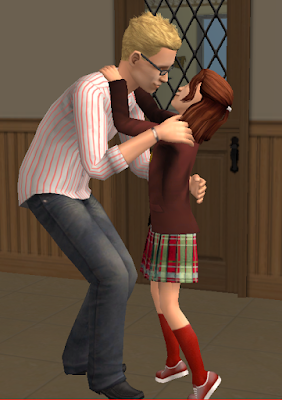 The morning bell rang out in the corridors of St. Macrina's Academy.

"Honey... do you have your lunch? And your pencil case?"

"All right, all right. Forgive me, sweetheart... I just want everything to be perfect."

As he looked at his daughter dressed smartly in her new school uniform, Archie's gears were whirring faster once again.

Was he malfunctioning? Was this something he should be concerned about?

Oh, well - there was no time to worry about it now. Today was Anna's big day. If he seemed worried, she would be, too. Right now, she was a bundle of excited energy. That was how Archie wanted things to stay.

"Uncle Jack is sorry he couldn't be here," he told Anna, "but he has to work today. He'll be there at dinner to catch up on everything, though."

As he and Anna shared one last hug, neither on them noticed the young, blonde-haired girl standing behind them, staring at them with a strange fascination. 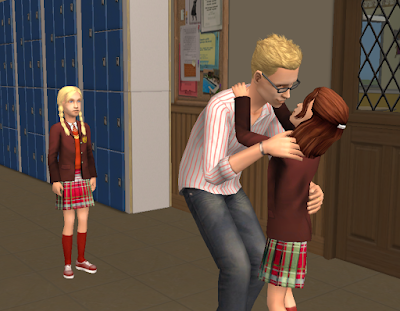 "Goodbye, Anna," Archie said, gracing her cheek with a kiss. "Have a great day. Make me proud."

After waving goodbye to her father, Anna hurried into the classroom - closely followed by her blonde classmate. She stayed right on Anna's tail as she hung up her coat and bag, until finally, as Anna idly browsed the bookshelf before the teacher arrived, she spoke up. 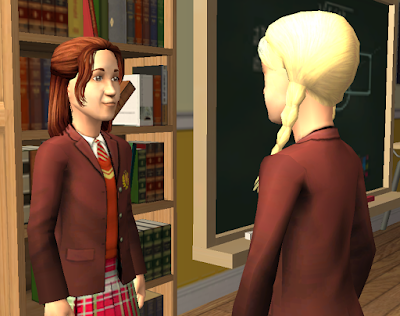 Stunned, Anna turned around to face the girl.

"That was my daddy," she explained.

"Why wasn't your mummy here?"

"I don't have one. Just my daddy and Uncle Jack."

"That's weird," the girl hissed, pulling a face. "And your daddy has a weird voice, too."

"Isn't that the freaky country with the monster, where the men wear skirts?"

"It is!" the girl shrieked, delighted. "Your daddy's a freak!"

Pulling a silly face, she waved her hands around wildly - teasing Anna mercilessly. 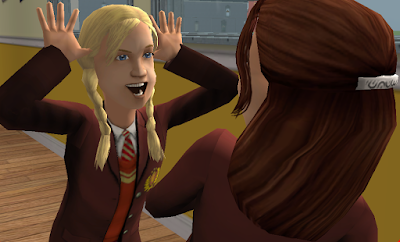 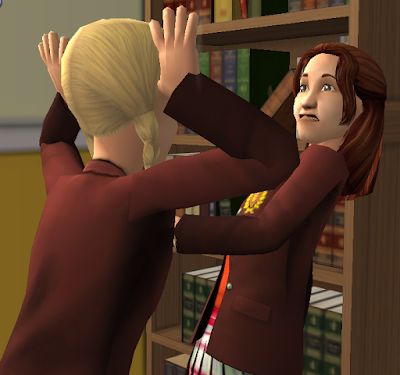 Anna, aghast, didn't know how to respond. As she watched the girl's cruel antics, horrified, she was mercifully saved from more torment by the arrival of the teacher. She was hoping that the girl would get into trouble, but the wily child was too quick - returning to normal the second she heard the door creaking open.

"Sinead Smith!" the teacher snapped in irratation. "What are you doing out of your seat?"

"I just wanted to say hello to the new girl," Sinead replied - with a voice that practically dripped of syrupy sweetness.

"Ah, yes... you must be Anna Crosswire," the teacher went on, in calmer tones. "Welcome to St Macrina's. Sinead, will you show her to her seat, please?"

Fate can be cruel sometimes, and as fate would have it, Anna's desk was right in front of Sinead's. All throughout her first day, she did her utmost to pay attention to the lessons, but was forced to ensure the blonde girl's quietly-hissed insults and giggles the entire time, without rest.

By the time the final bell rang, she had tears in her eyes. 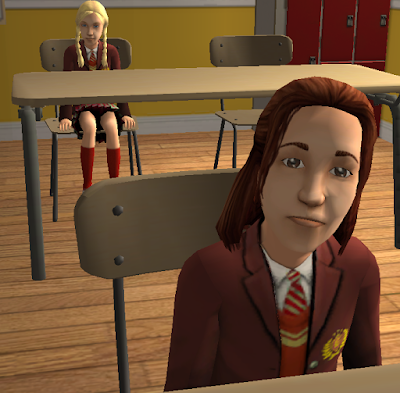 Anna was very quiet all throughout dinner that night. When Jack had eagerly asked her questions about her first day at school, longing to know how it had gone, Anna had simply insisted that everything was "fine" - refusing to go into any more detail.

Now, as Archie tucked her up in bed, he could tell something was wrong. Normally, it was a struggle to get the energetic, excited Anna to settle down for the night. Tonight, however, she seemed almost... defeated - sitting still in the centre of her mattress, pulling the sheets up around her, and saying nothing. 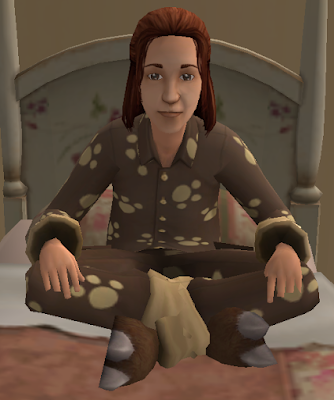 "Anna," Archie coaxed gently. "I know something's wrong. If... if something happened at school today, then... then I need you to tell me, all right? No matter what anyone may have said."

Anna looked up at him, and sighed.

"A girl in my class is teasing me," she admitted, with some reluctance. "She said you were a freak." 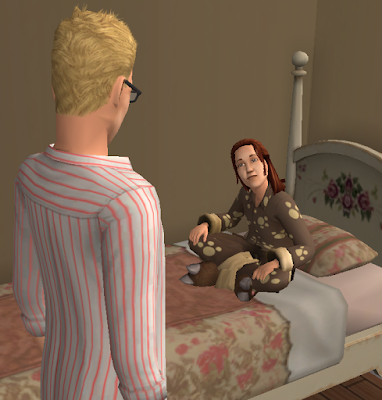 Archie sat himself down on the end of Anna's bed, reaching over for her hand.

"No, Daddy! No!" Anna insisted. "You're the best daddy in the world. She just said you were a freak because you're Scottish, so your voice sounds weird, and because I don't have a mummy, like all the other kids..."

"There are many different kinds of family, my love," Archie said. "Many children only have one parent, or two daddies or two mummies, or no parents at all. As for my accent, well... Scotland has a population of five million or so people who sound like me. Clearly, this little gremlin of a girl has been raised to be very narrow-minded."

Tucking her in, he kissed her forehead - reaching out a hand to stroke her hair, before straightening himself up. 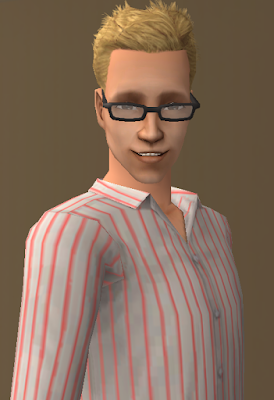 "Sweetheart," he said firmly, "when you go to school tomorrow... I want you to ignore everything that little gremlin says. Rise above it. You are special, and you are loved. You are better than any of those nasty words she says - all of which aren't true. Don't give her the pleasure of a reaction to them. Can you do that for me?"

"I know you will. Goodnight, darling."

Archie stood watch over Anna as she snuggled down under the bedsheets, until soon, she fell into a deep, peaceful sleep. No nightmares appeared to be troubling her, which was a great relief. 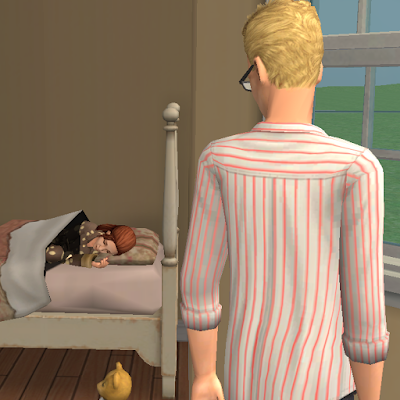