Now that Clara and Dahlia are toddlers, its time for them to start developing vital skills! Given that Benjamin and Adelaide are busy with schoolwork, and that Amelia has her hands full with the infants - not to mention the one she has on the way! - she reluctantly dips into her savings to buy a tablet for her two little munchkins.

While she still assists with playtimes and potty training whenever she can, it's good to know that they can start to learn independently whilst she's rushed off her feet with nappy changes and feedings. 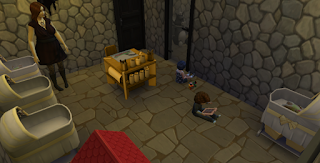 As for the two eldest reapers-to-be, their hard work has been paying off! They come home from school with As, which means they're ready to become teenagers!

The first-born is naturally the first to blow out the candles... 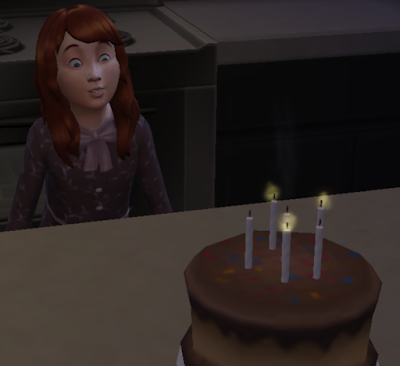 Like her mother before her, I gave her a bit of a gothic makeover... but that lipstick came with the aging process. I kept it, as I reckon it suits her. Even a future Grim Reaper is allowed a bit of colour, don't you think? 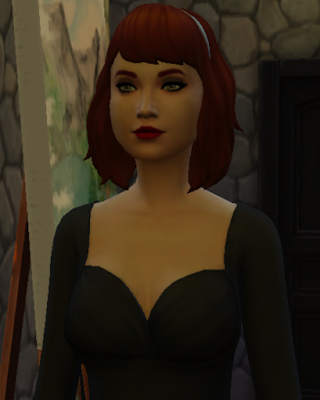 Speaking of suits, that was my choice, but this time, the glasses were the gift of fate. Such a smart-looking young man, in both senses of the word! You can tell his father is one of the Curious clan! 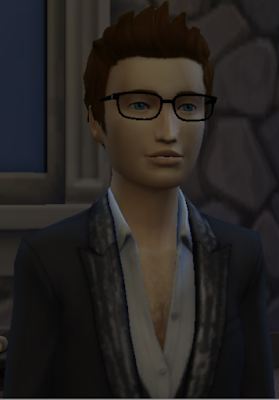 
One massive benefit of having teens in the house is that they're grown-up enough to help care for their younger siblings - a role they seem to take on with relish. Adelaide shows Dahlia what the potty is all about... 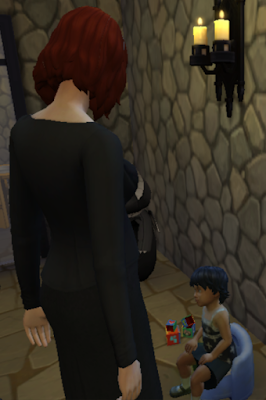 ... whilst Benjamin gives his mother a break by tending to the little family members of all. (Once he's fully grown, perhaps I'll pop him on the Gallery for other baby challenge writers to use. After all, his behaviour already suggests he'd be a great father!) 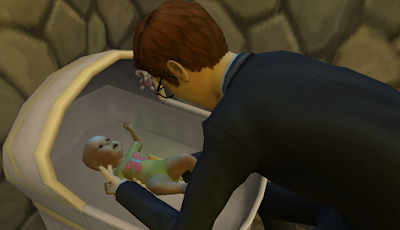 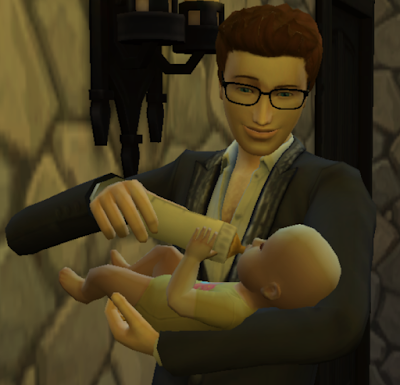 I mean, just look at this. You can feel the maternal and fraternal pride just oozing out of this image. After this, no wonder the blocks became Clara's favourite toy. 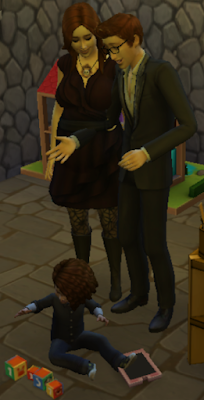 Still, learning isn't only important to the toddlers. The new teenagers also need to start developing adult talents in order to improve their grades. Thankfully, they seem to have inherited some sort of Livingstone love of creative pursuits. Benjamin builds on his budding violin skills, while Adelaide stands in Amelia's footsteps in front on the easel. 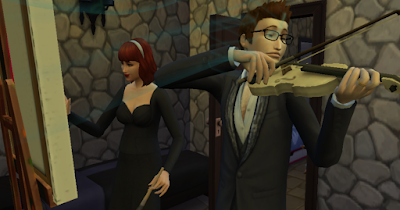 As fun as these hobbies are, it's not an excuse to neglect schoolwork. Using a tip I picked up from other challenge players (thanks, folks!), I decide to start a homework club - the Grim Study Buddies - for the Livingstone siblings, with Adelaide and Benjamin becoming the founding members. It will prove to be a godsend - no more missed assignments!

That said, don't work too hard, you two! I need both of you to stay here and help out with your little brothers and sisters for as long as you can! 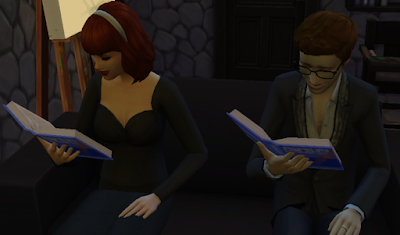 Especially now that there's one more! 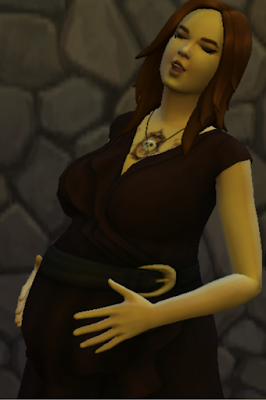 Great news for Benjamin! We finally have another boy! 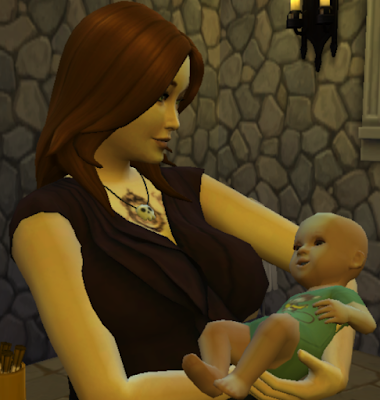 G is for Gabriel, angel on Earth.

With help from their two teenage teachers, Clara and Dahlia are soon all brushed up on their toddler skills and ready for childhood! 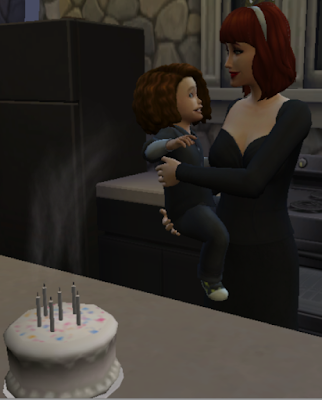 (I wasn't quick enough to grab a shot of Dahlia blowing out the candles, so here are both girls post-party!) 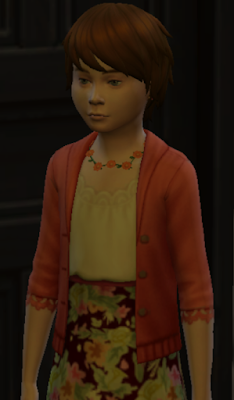 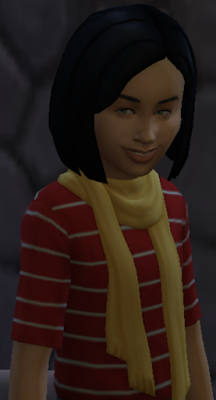 
As they start school, both girls are swiftly inducted into the Study Buddies...

... and take up hobbies. Clara, it seems, is destined to be yet another Livingstone artist, whilst Dahlia, a budding socialite, spends hours talking to herself in the mirror, perfecting her charm to utilise on her classmates. 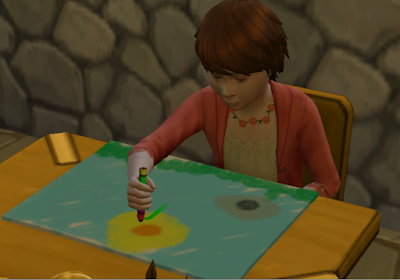 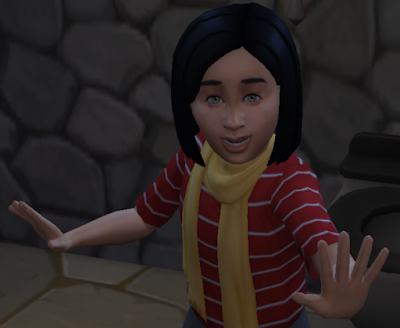 Meanwhile, Einin enters the terrible twos, and inherits the tablet - which Amelia still insists is purely for educational purposes. 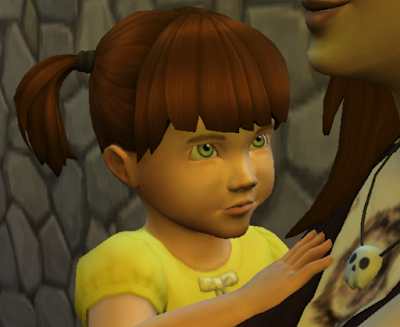 With the older kids busy as bees, her newborn son content in his cradle, profits from paintings in the family fund, and a full house meaning that Baby H is postponed, Amelia takes some time for herself. Having seven kids hasn't been easy on her figure, so she decides to hit the treadmill: hoping that a slimmer physique will boost her sense of sexiness, and help her win more baby daddies to fulfil her promise. 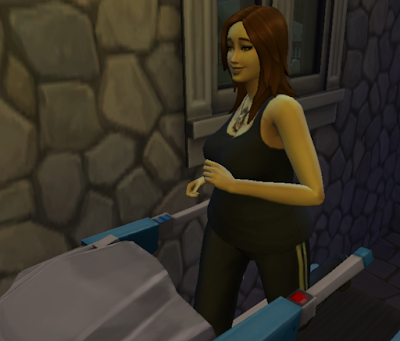 But, with Adelaide now on the verge of adulthood, Amelia's supernatural supervisor will soon be paying the family a call...
Posted by Little-Red-Hat at 04:37