Hearing Libby's anguished mewl, Alex rushed out onto the porch, only to see the young lady flying down the outside steps towards her weak and wounded brother. However, as Alex looked over at Marlon's fragile form, something seemed... odd. He appeared to be flickering before the vampire's vision, as if he was a trick of the light...

It was too late. Libby was already helping Marlon to his feet, throwing her arms around him to better support him. 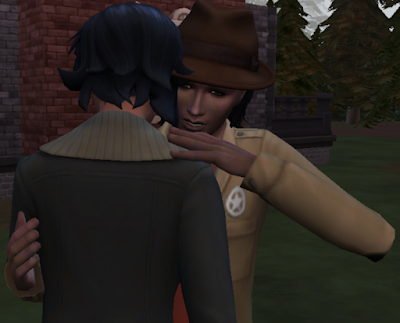 "Marlon! Are you all right? What happened to you?"

Unseen by his Good Samaritan, a sinister smirk grew across his lips.

Cackling, "Marlon" seized Libby's throat in a choke hold, turning her so her back was against his belly , and holding her firmly in place. As Libby cried out, she saw her brother's appearance melt away, revealing a pair of eerie green eyes and a hideous chalk-white face. 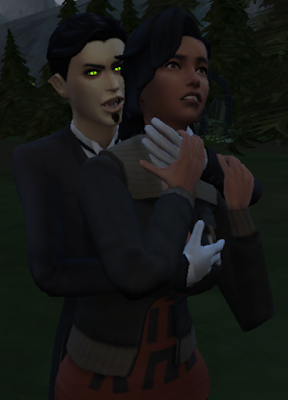 His hostage had no intention of going quietly. Thrashing about wildly, Libby managed to break away from Renfield by elbowing him violently in the jaw. As he hissed and grabbed hold of her arm, she pulled it away and shoved him sharply in the chest, causing him to loose his footing. 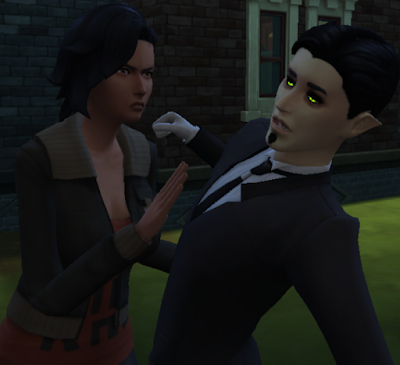 "Insolent little b***h!" Renfield snapped, jumping back to his feet. "You'll pay for this!"

Muttering Latin phrases hurriedly under his breath, Renfield focused his intense gaze on Liberty and waved his hands in mysterious movements. At once, Libby felt her eyelids growing heavy... and within seconds, she was magically rendered unconscious: her body falling onto the grass with a soft thud. 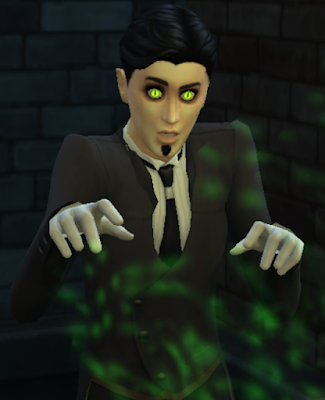 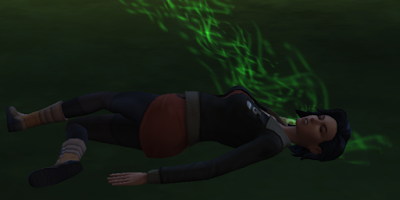 As Alex beheld Libby's terrible fate, he knew he could cower away no longer: a great flame of rage burning in his heart. Screaming an battle cry, he flashed his fangs and charged at Renfield - engaging him in the ancient ritual of vampiric sparring. 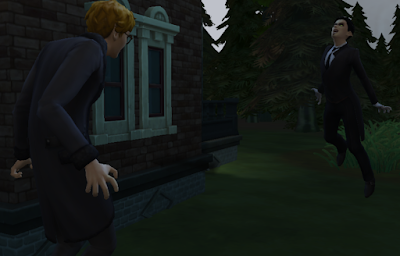 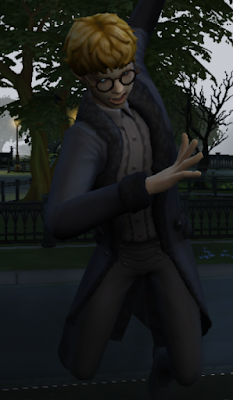 As they both leaped high into the air, screeching and lashing out at one another, Alex tried desperately to block the villainous vampire's attacks. Punches were hurled, kicks were flayed and jaws were snapped in the frenzied brawl. Alas, despite battling valiantly, Alex proved too weak and inexperienced to best the usurper in battle. 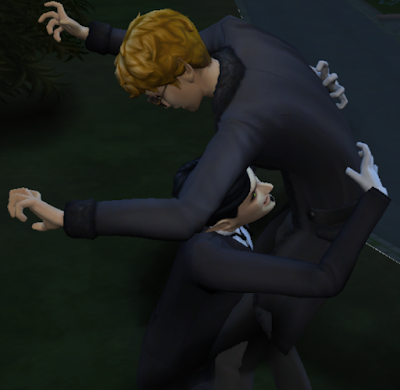 After being dealt one final, almighty punch to the jaw, Alex wailed and plummeted back towards the ground - the victor slowly hovering down to stand over him with a smug look of superiority. 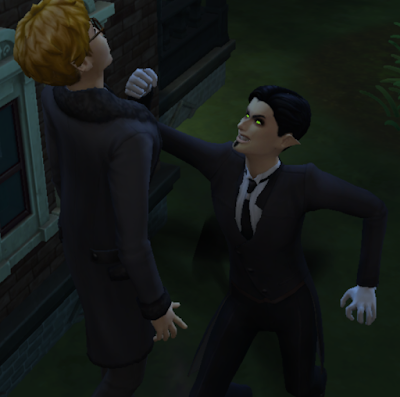 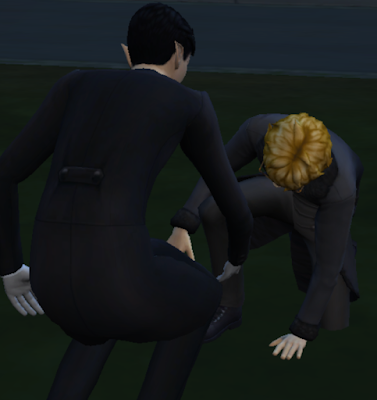 "You're pathetic, Thorebourne," he spat. "Do you care for this girl? Do you love her? Did you think such a sorry emotion would give you the strength to save her? Well, you were wrong - you foolish boy."

As he slammed his heel down onto Alex's hand, the student screamed in anguish.
"You have no right to dwell amongst vampire kind," Renfield hissed. "I would destroy you - but you're unworthy of such an honour. Leave this place, and don't disgrace me with your presence again. Forget the girl. By the time this night is over, she will be my bride!"

With a weak croak, and tears springing to his eyes, Alex keeled over, exhausted, onto the cold, hard earth. 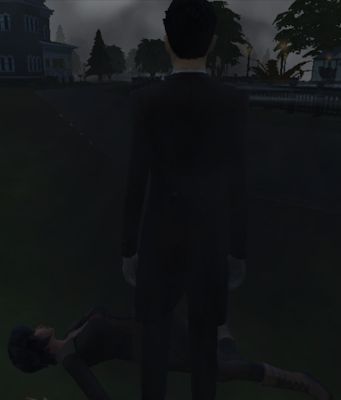 Meanwhile, Renfield, more arrogant than ever, casually strolled towards the still-unconscious Libby - clouds of black fog swirling around him. Standing over her body, he cloaked her in this mysterious unnatural mist... and in an instant, they'd both vanished into thin air.

As Alex slowly broke down, the wounds upon both his body and his pride hurting him deeply, he heard a shout, and the sound of hurried footsteps rushing towards him.

It was Marlon. The real Marlon.

Upon seeing the injured student, the journalist had immediately dropped the bags of equipment he was carrying, and ran over to Alex's aid - propping him up when his legs almost gave away from underneath him. 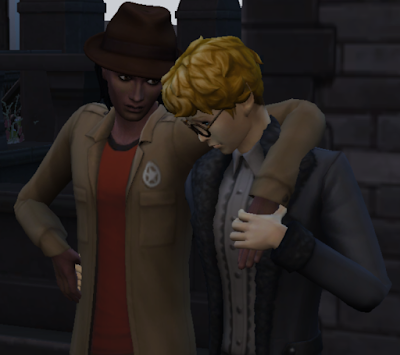 As Alex looked up at Marlon, he began to tremble - tears welling up in his eyes.

Marlon's eyes widened in terror. In disbelief, he slowly shook his head.

Growling, Marlon seized Alex's shoulders tightly, and pulled him up to his full height.

"There's no time to lose," he barked. "We have the equipment. Take me to the Imperial Manor. Now."

Within the hour, Marlon and Alex both found themselves crouched behind a row of hedges outside a vast, stone-walled mansion. 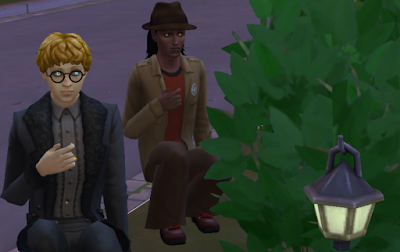 "This is it," Alex said in hushed tones. "What are we going to do?"


"I have to save my sister," Marlon replied. "And wherever she is, Renfield's bound to be close by."

Slowly, he tapped his jacket pocket.

"I have the stake ready. I need to track that bastard down, slay him, and end this once and for all."

"What about your grandfather?" Alex asked.

"That's where you come in. Do you know where he and the Princess are?"

Marlon threw him a screwdriver, which the student caught clumsily in his hands.

"Whilst I've got Renfield distracted, you sneak down there and spring them out," Marlon said. "You said magic won't work on the lock, but a little elbow grease might. Are you ready?" 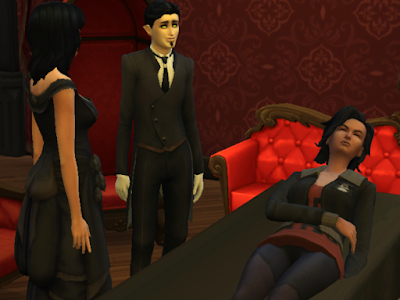 Meanwhile, within the lounge, a still-chuckling Renfield laid the motionless Libby onto a large table in the centre of the room, like a sacrifice being offered on some dark unholy altar.

Normally, he wouldn't bide his time like this, but this little lady wasn't your everyday vampiric bride. An effort had to be made. Her conversion would require a sense of ceremony - of grandeur - as it would be the moment he truly claimed victory over the Dark Imperial Family. Her transformation would be witnessed by his prisoners: forced to observe, and powerless to stop it.

As he gently stroked Libby's hair, Cassandra - his first bride - approached the table open-mouthed. She wasn't jealous of this a new arrival... but rather, fearful for her life.

"Fear not, my love," Renfield replied. "I shall still cherish you just as much, even as a lesser bride. But Miss Miskin is very important to me. I must have her as my Dark Empress - just to see her grandfather squirm."

"My God," Cassandra gasped. "How many lives do you intend to destroy? You've already robbed me of my future for your own selfish desires, and now, you'll ruin hers too?! She's little more than a girl!"

"Silence! By granting you eternal life, I have saved you from a grisly death! Be grateful!" 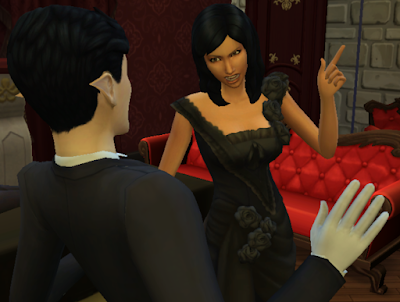 "Never!" the former model screamed back. "I've had enough of you! And as God as my witness, I won't let you destroy that girl like you've destroyed me!"

Screeching, she hurled herself at Renfield - clawing dementedly at his face and clothing like a wild animal. The vampire ducked and weaved to avoid her blows at first. but soon, he tired of this performance, and slapped Cassandra sharply across the face - sending her tumbling to the floor.

"Hey!" came a cry from the back of the room. "You leave her alone!"

Renfield turned, and began to cackle when he spotted a young man - with some familiar features - staring at him coldly. 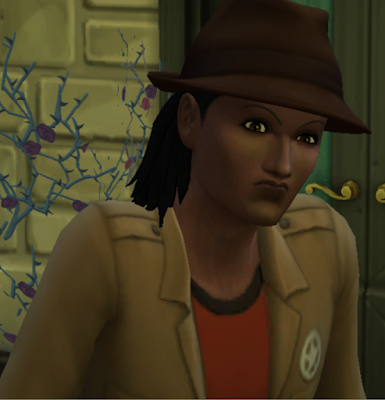 "Ah," he cried, delighted. "You must be Marlon Miskin. Sorry for not laying something on for you -  I wasn't expecting you so soon. But please know that I am simply thrilled to meet you."

"Let Ms. Karahalios and my sister go, you scumbag," Marlon spat in reply. "They're of no use to you. I'm the heir to my grandfather's family legacy. I'm the one you really want."

"Your previous legacy is meaningless to me," he barked. "However, I know why your grandfather called you here. He thinks the Gods favour you... that you are the one who's going to destroy me."

Hissing, he walked slowly towards Marlon with menacing, malicious footsteps.

"But I think the reverse is much more likely!"

Melting into his purest, darkest, most demonic vampiric form, Renfield charged at Marlon at lightening speed - wrapping his hands around his neck in an attempt to choke the very life out of him. As Marlon gasped for breath, he grasped the stake tightly in his own hand and swiped madly at Renfield, desperate to hit the right spot.

Cassandra, seeing this terrible fracas, rushed at her much-hated husband: clawing at him to pull him back. She prayed she could give Marlon the space and time he needed to make the fateful strike. 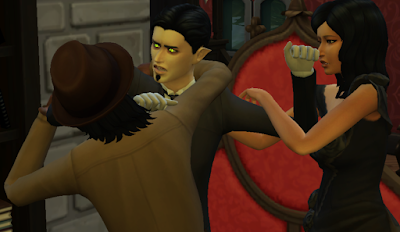 Marlon reached up his arm in an attempt to swing the stake downwards. Renfield grabbed the weapon and yanked it out of his hand, then used all of his supernatural strength to hurl the journalist across the room.

Screaming, Marlon crash-landed on an antique table, which collapsed upon impact - splinters and wooden shards spiralling out beneath him as he tumbled to the floor at great speed.

After pushing Cassandra away violently - causing her to slam into a stone wall - Renfield regained his composure, then twirled the stake in his fingers as he approached Marlon, who was groaning as he scrambled onto his hands and knees.

Before Renfield had time to react, he was sent reeling backwards by a mighty punch to his face - one that blackened his eye, and caused his lip to burst and bleed. Licking up the red liquid with some relish, he looked up at his attacker. 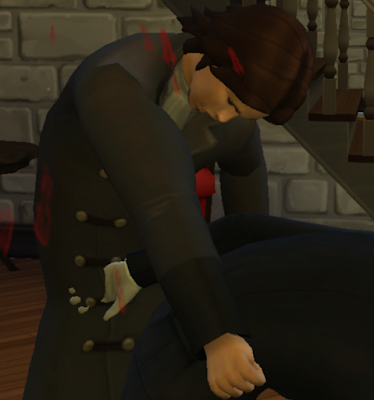 It was a livid-looking Marcel, freed from the cell... with Alex and Maven not too far behind him.

Smirking, Renfield squared himself up... and lunged.

This is the 100th post on Blue's Sim Stories!
Thank you to all of my readers for their ongoing support!
Posted by Little-Red-Hat at 13:01