The Miskin Legacy - Letters to Mitch: Minerva - Souvenirs of Sixam

For the entire time he was in prison, Mitch Miskin was never short of reading material. His family and friends wrote to him often, giving him updates about their lives, and making sure he knew that he had not been forgotten.

He saved everything he received in an old cardboard box, which had kindly been given to him by one of the guards. (It turned out profits from one of Mitch's heists had paid for his children's school renovations, so he was prepared to do him a few favours.)

Now, with his release date drawing near, Mitch sat quietly in his cell, sifting his way through various pieces of paper, trying to refresh his memory about the things he had missed.

As he picked up one folded piece of paper, a photograph fell out from within it. It showed a group of aliens stood together in spacesuits on a bizarre, oddly-coloured landscape.

A family photo of the Lee Harkers.

Smiling, Mitch opened up the letter, and skimmed through the lines.

Has it really been fifteen years already? Goodness, how time's flown! Well, it has for me, at least. I can only hope it's been the same for you.

The family and I are doing well, and we can't wait to see you again... 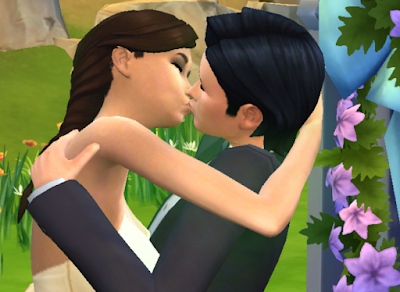 A month after Mitch's imprisonment, Minerva had married her beloved Gabriel in a lavish ceremony at the Miskin house. It was a much needed day of celebration for her family and friends, who were glad to have a distraction from the sadness of recent times. 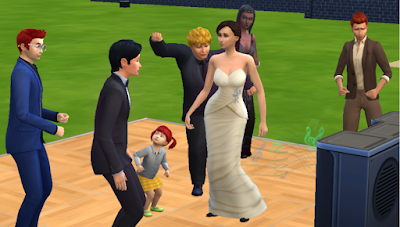 With the matrimony rites concluded, the newlyweds - who were now living with Michael and Megumi in the Lee Harker home - set off for their three-month honeymoon. As a wedding gift, Michael had finally completed his restoration of the elder Gabriel's rocket, and this allowed the couple to vacation at the one place they were both longing to visit: their ancestral homeworld of Sixam. 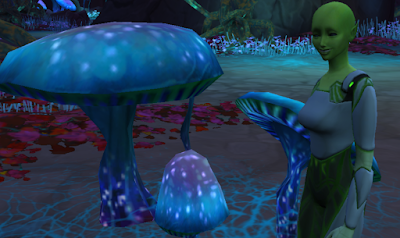 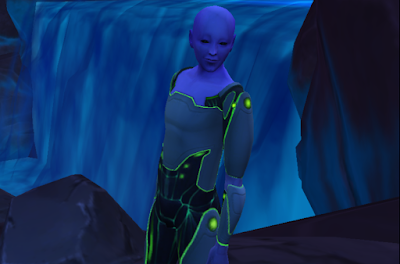 There was no need to disguise themselves here. On Sixam, the couple could simply relax and be themselves - spending their days exploring the planet together, keen to learn more about their forebears' culture, and enjoying long, cool nights cuddled up together in their landing craft.

Before they knew it, the three months were up. It was time for them to return to Earth and their everyday lives. After stocking up on beautiful crystals and other local treasures, Mr. and Mrs. Lee Harker returned to the rocket, and headed home.

Their re-entry into the planet's atmosphere proved to be slightly more troublesome than they'd anticipated. Luckily, the pair managed to navigate their way through it relatively smoothly, and eventually came back to Earth with a little bump.

In Gabriel's case... quite literally. 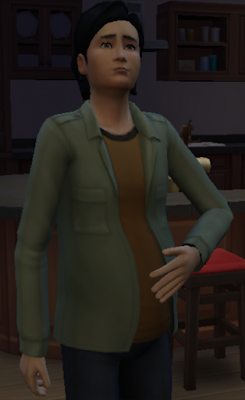 For the next six weeks, Gabriel had an excuse for everything. His weight gain was simply due to his metabolism playing up: his body had trouble processing Earth food since it was now used to the very different diet he'd enjoyed on Sixam. It also seemed one side effect of space travel was long-term nausea, that often led to sickness in the mornings... in addition to psychological effects such as mood swings, which had Gabriel pushing Minerva away from him one minute, and begging her for a cuddle the next.

Michael wasn't buying it. He presumed that the couple had enjoyed their "conjugal rights" during their marriage, and it seemed obvious to him that his son's various ailments were nothing to do with riding in a rocket. 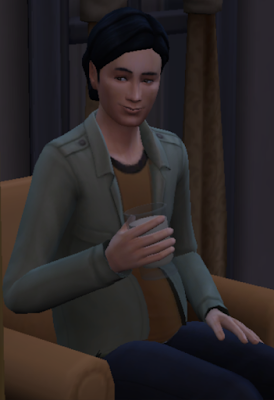 One evening, whilst Minerva was making supper in the kitchen, Michael spotted Gabriel displaying yet another telltale sign - chugging a glass of milk, a drink the Lee Harker men traditionally despised. Then and there, he decided it was high time he fished the boy out of that great Egyptian river.

They'd done them before, certainly, but not since Gabriel was a kid. It was a skill they had both perfected after many years of practice, following lessons from his Aunt Crystal. Back then, it had usually been used to figure out whether it was him or his cousin Mike who had broken the new vase or stolen cookies from the kitchen jar. Now he was all grown up - why on Earth would his father need to access his thoughts and feelings?

"I have been worried about you," Michael told him, conveying great concern. "If you are ill, I want to know what is wrong with you. If it is some virus you have caught on Sixam, then doctors here may not be able to cure it...  but I might stand a chance with one of the remedies in the notes my mother left me."

"I will be quite fine, I am sure," Michael answered. "Now, please - open your mind to me." 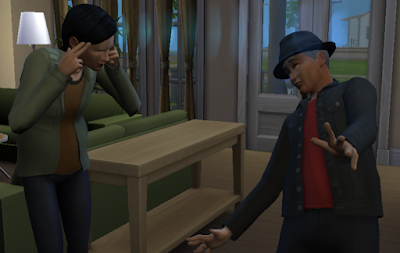 For just a few moments, Michael's body became a reflection of Gabriel's own. He sensed a familiar fluttering in his stomach. Before his eyes, a crystal-clear memory from long ago floated to the surface of his brain: that nerve-wracking night, back when he was a young man, that he had told Megumi - his girlfriend of just a few months - the news that would change both of their lives forever. 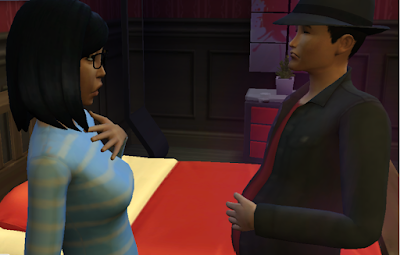 As the link was severed, it took Michael a minute to get steady on his feet: shaking his head vigorously as he returned to the here and now. He looked over at Gabriel, who was watching him nervously - and gave him the biggest smile he could muster.

"You really do not know?"

Gabriel's jaw dropped in shock. In the kitchen, Minerva stepped away from the bubbling pot on the hob, stunned by the words she had just heard.

"Pregnant," Michael told her. "With your children, naturally. Congratulations."

"Of course. After all, you and Minerva are both of alien blood. That means your fertility levels with one another are far higher than when a Sixamian pollinates a human."

Smirking, Michael leaned forward to whisper in Gabriel's ear - but did it loud enough for his new wife to hear as well. 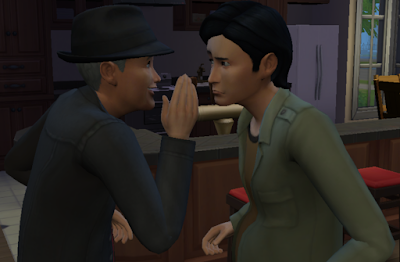 "You are going to have octuplets!" he said proudly.

As Michael watched, Gabriel's face turned as white as chalk. Sweat broke out on his brow. Excusing himself, he hastily pushed past the elderly ex-detective, and raced to the toilet in order to be sick.

As he heard the bathroom door slamming, Michael burst out into a mad cackle. 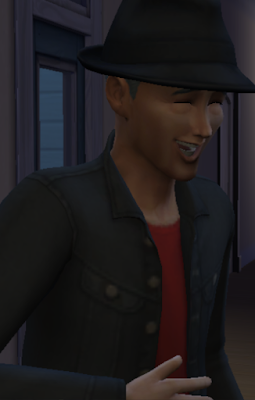 Minerva, concerned, motioned for him to approach the kitchen counter.

"He isn't really having octuplets, is he?" she asked.

"No! Of course not!" Michael reassured her. "That was just my little joke!"

His daughter-in-law groaned in irritation. 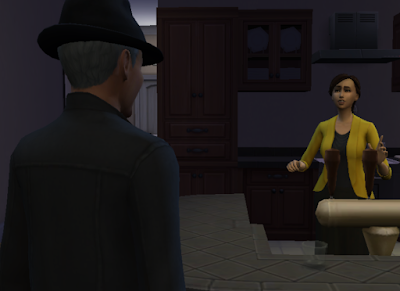 "Really, Michael!" she snapped. "What a wicked trick to play! Telling your ill son that he's pregnant! Scaring the living daylights out of him - and me, for that matter! You should be ashamed!"

Michael, composing himself, turned to her.

"Oh, no," he added. "You misunderstand me. I was making it up about the octuplets, yes. But I can assure you... he really is pregnant." 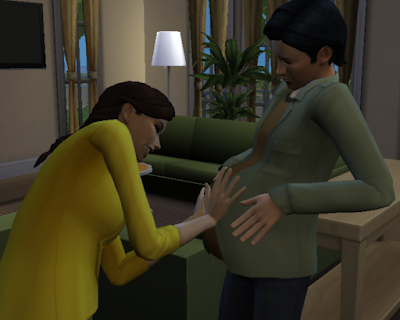 Over the next few months, as Gabriel's bump grew bigger, the couple began to wonder if Michael had been making it up about the octuplets, after all. The grandfather-to-be assured them that he had, and that they had nothing to worry about.

Still, as happy as he was to be having children with his beloved Minerva, Gabriel still dreaded the terrifying event on the horizon. 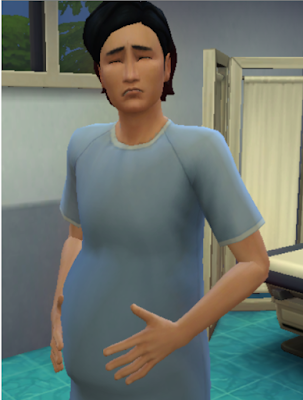 In the end, when the time finally came, Minerva remained right by her husband's side, helping him through the agonising process. Gabriel - who now understood why Theo had screamed so much, since his own wails were quickly starting to rival them, and who now had a new-found appreciation for his father and grandfather - held her hand constantly and cherished her presence, his love for her growing as she coached him through each wave of pain. Even in a Sixamian body, which was designed for this task, it was clear to him that childbirth wasn't going to be a walk in the park. 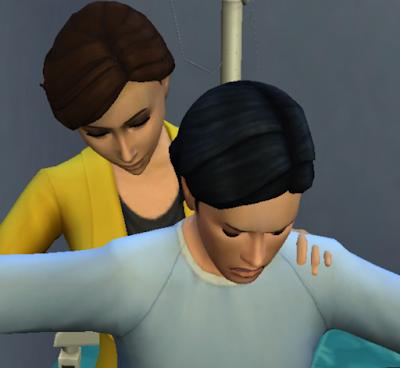 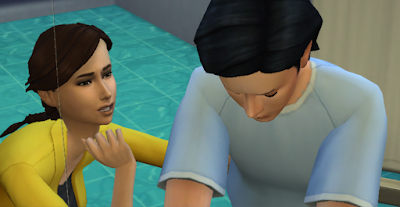 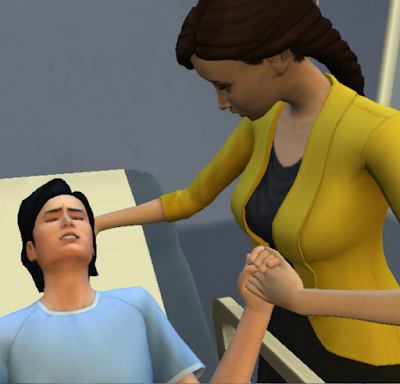 Soon enough, he found himself walking in the footsteps of so many Lee Harker men before him: the journey down to the little room, and the large cocoon-shaped machine within - the vessel through which the life within him would enter this world. 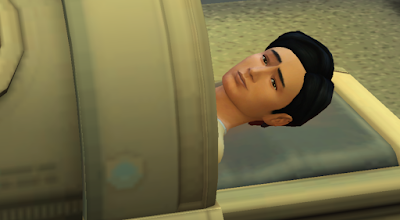 When that blessed moment came, and he saw the look of joy on his wife's face, Gabriel thought he would die from the happiness alone.

Michael's use of the plural, as it turned out, had been quite apt. 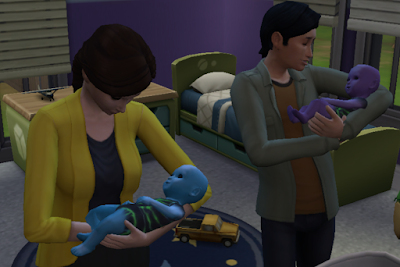 The elder of the pair by 15 minutes was an adorable little girl, who had inherited her father's lavender-coloured skin. However, when she was shortly followed by her twin brother, the new parents found themselves staring in shock at his ice-blue pigmentation. In the delivery suite, Minerva had eyed Gabriel up suspiciously - that alleged solo trip he'd made to the local market back on Sixam now being called into question.

Thankfully, Michael soon put their mind at rest. Blue skin, he informed them, was a recessive gene in Sixamians - just like certain eye or hair colours in humans. According to his mother's notes, his own maternal grandfather had possessed that very skin tone, meaning he and Gabriel were both carriers of the gene. This little boy, he'd said, was very much a member of the family, and beyond all doubt, Minerva's full-blood child.

The next step was choosing monikers for the pair. Gabriel suggested naming them after relatives, but Minerva preferred to not muddle up the Lee Harker family tree any further. She'd noticed that both her husband and his father (and by extension, his grandfather) were named after archangels, and perhaps one of their little ones should follow suit.

Thus, after undertaking a bit of research, their new daughter became known as "Ariel".

As for their son, the couple drew inspiration from Minerva's name, and settled on something mythological  - "Loki." 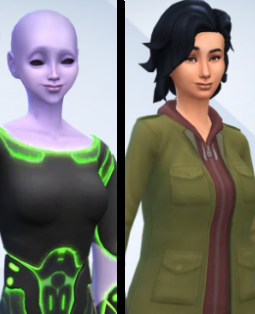 Ariel has been doing really well at school. Her teachers say she is clever and observant - a chip off the Lee Harker block, I suppose. 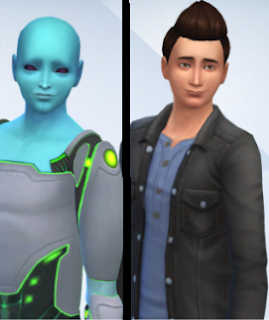 As for Loki... well, I know he has brains in there somewhere, but yesterday, he got detention for starting a water balloon fight in the canteen.  Honestly, he's a mischievous little rascal - I doubt I could have chosen a more fitting name for him. In some ways, his wild antics remind me of our father. I just hope he doesn't get himself into serious trouble one of these days!

Please let us know when you're released - we'd love to have you around for dinner sometime. Of course, we know Nimue and your son will be your main priority... but don't forget that your littlest sister loves you very much, too.

Stay safe, and see you soon.