Before the sun had set on their wedding day, Roxy had whisked Mac away on a plane to the distant mountain resort of Granite Falls. Their residence for the next week was to be a rustic but elegant log cabin on the shores of a crystal-clear lake.

For the first two days, neither of them saw daylight. 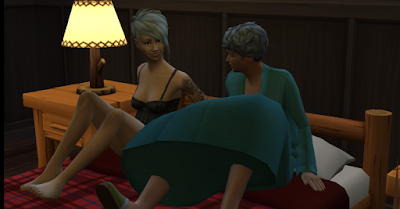 It came as something of a shock to Roxy that Mac, despite his advanced age, was still very much a passionate and enthusiastic lover. In truth, he was undoubtedly the best she'd ever had. After a couple of - frankly, marathon-style - sessions, she felt her conscience clawing away at her to say something, and so, she rolled over in bed to turn to her husband and address him.

"Roxy, darling," he replied, "if that's how I go out, I want it printed on the front cover of every newspaper on the planet."

He grinned, and Roxy's mouth soon mirrored his. With a growl, he lunged forward to embrace his beloved, ready for yet another round.

Still, after a few "strenuous" days, Mac relented, and he thought it best to maybe see more of the wonderful place where they were staying. He and Roxy took to going on long walks together in the sunshine, taking regular rests at some of the area's best known beauty spots. 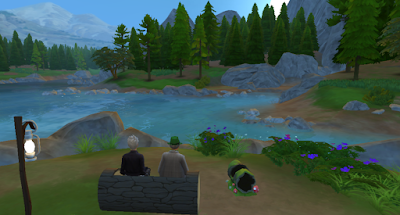 In the evenings, when the weather turned cooler, they played games and partook in activities at their cabin - often ending the day with a chat and cuddle by the campfire. 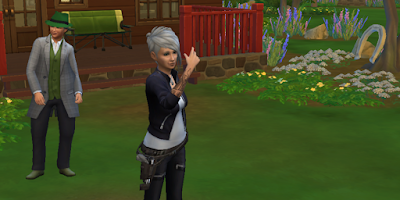 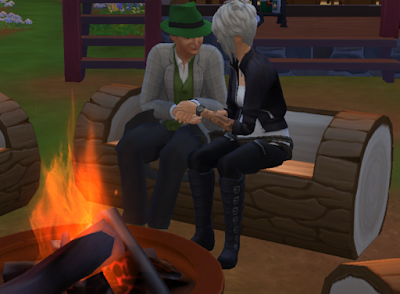 Mac and Roxy had known each other for almost their entire lives... and yet, it was clear they they still longed for one another's company. Now, a romance, long suppressed and finally free to flourish, was drawing them closer to one another than they had ever been before. 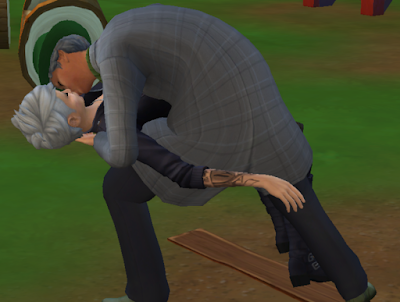 There was only one major change to their routine. One that Mac had insisted on. Late at the night, when he and his wife were settling down to sleep, a certain exchange of words had to occur - day in, day out.

Both of them knew the exchange had to happen, and were glad to do it.

The morning that his parents were due to arrive home, Marcel sat in the living room of his family's now-ancestral home, trembling with nerves and doing his utmost to carefully pick the words he was going to say. The presence of a pile of open letters, each one clad in a ripped brown envelope, haunted him from a nearby side table. The words and revelations every single one of them had brought him felt like a sword hanging over his head.

The front door swing open, and the newlyweds waltzed in - holding one another's hands, canoodling and giggling like teenage sweethearts. Roxy looked towards her son, smiling - but her face froze into a look of shock when she noticed the grim expression on Marcel's face.

"Marcel? Are you all right? You look like you've seen a ghost!"

Before he could say anything more, he was interrupted by a high-pitched wail coming from the back room. Mac, alarmed, pushed past his son and headed straight for the door, whilst the young artist crumpled onto the sofa with his head in his hands, gruffly one muttering one last phrase.

Roxy marched off after her husband, equally confused. Upon reaching the back room - the family nursery - she was greeted by the sight of her aged husband peering down into two small cradles before him.

Two babies. One of them crying.

Mac, stunned, scooped the wailing infant up into his arms: holding him close in an attempt to sooth him. Roxy, meanwhile, turned her attention to the other child. As the elderly pair looked at each other, not knowing what to do or say, they noticed that Marcel had appeared in the doorway. 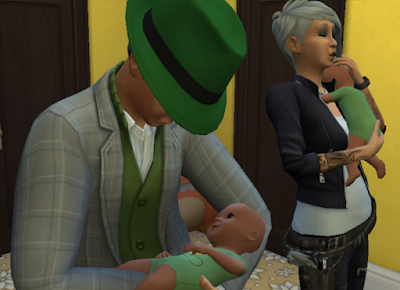 "Their names are Mitch and Marius," he told them. "They're your grandsons."

It took a few moments for Mac to take all of this in. After a brief pause, he walked up to his son, and handed him the child, smiling.

"Marcel? Would you mind looking after the little dumpling for a moment?"

"Sure thing, Dad," Marcel replied, cuddling his son to his chest. "My pleasure."

Fifteen minutes later, when Mac finally regained consciousness and the two baby boys were tucked up asleep in their blankets, Roxy ordered - not asked - that all three adults gather in the living room to talk about the situation. 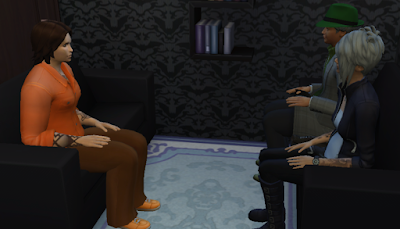 Moments later, all three of them were sat on the sofas, essentially staring one another down. Whilst Marcel looked very sheepish, Mac was giggling uncontrollably.

Roxy, irritated, elbowed him sharply in the ribs. To her, this was no laughing matter. She rose from her seat and began to pace up and down the room: eager to release the anxious adrenaline that was now flooding her body.

"And you're sure they're all yours?" she asked her son. "All of the babies mentioned in these solicitors' letters?"

"Yes. I've been with all five of the women. I don't deny it. Besides, they've done DNA tests. It's official. All of those children are mine."

"God, I can't believe you could be so irresponsible! Going around town like some sort of - "

"Excuse me," Mac piped up, "but unless I'm very much mistaken, I wasn't exactly the first man you had in your bed."

"That was different!" Roxy snapped back. "I was careful! I took precautions! Marcel, on the other hand, hasn't just left a string of broken hearts behind him - but a brigade of single mothers! Ones who'll be out for money, no doubt! And God knows what else he might have exposed himself to!"

"It'll be OK, Mum!" Marcel told her. "I'll make the payments! I'm going to support these children - I promise! And don't worry... I've been checked. I've a clean bill of health. Well - mostly."

"Don't worry, it's nothing like that! I... I have a stomach condition, that's all! Nothing to worry about! I'll be fine in a few months."

"There's another potential issue here," he said. "As my only son, you're the current heir to the Miskin Legacy. But now, in regards to the next generation, it's fair to say that you've muddied the waters, as it were. Exactly how many of your little blessings are sons?"

Roxy slammed her palm against her forehead.

"Look, I've got it all worked out!" Marcel squeaked. "I've jotted down all of the birth dates and made some notes. The two boys in there are twin brothers - my first-born children. Their mother, Lillie... the black-haired woman from the coffee shop, you remember her? My first girlfriend?"

"Well... she got in touch with me first, too. She's asked me to take full custody of them."

"Full custody?" Mac cried. "Why would she want you to do that?"

"She only found out two weeks ago. Breast cancer. Terminal. She had planned to raise the boys alone, without me, and to tell everyone involved the truth when they were teenagers, but... well, things didn't exactly work out like she planned. She just wanted to make sure they were cared for. I'm their father. And soon... I'll be the only parent they have." 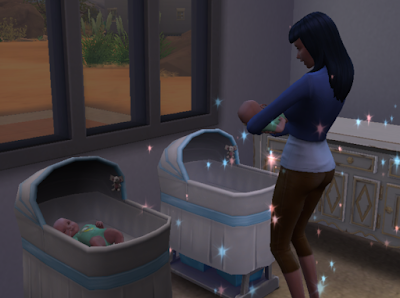 Roxy fell back onto the sofa - shocked into still silence.

"One of them will be my heir," Marcel confirmed. "As for who specifically, I'm not sure. The law says that, in the case of twins, one solitary successor has to be chosen. I'll... I'll need time to make such a big decision."

Roxy leaned forward, her elbows resting in her lap.

"And the other children?" she asked. "Who are they?"

Marcel reached into his shirt pocket, and took out a folded sheet of paper.

Roxy took it, and opened it up. Passing it over to Mac, the pair read through the names together.

"The... the details are still emerging on the newest addition," Marcel replied. "It's still very early days in the pregnancy, so I'm told."

Roxy breathed heavily though her nose.

"Marcel," she began, "you are my son, and I love you, no matter what. But... but I'm so angry at you for being so reckless and foolish! For all we know, you may have destroyed these innocent womens' lives! Having a child is a game changer! When I found out I was pregnant with you - I was excited, yes, but I was terrified, too! Scared of all the pain I was going to have to go through! Constantly worried about whether or now I'd have what it takes to keep you alive. I was so paralysed by my fear that, in the end, I left you almost entirely in Mac's care - something I now sincerely regret. But you, young man, have seemed content to go about and sire children willy-nilly... because you'll never understand or have to deal with the consequences!"

"Please excuse me," he whispered. "I'm feeling a bit nauseous."

As soon as he reached the bathroom, Marcel found himself hurling the contents of his stomach straight into the toilet bowl. Once the dirty business was over with, he splashed his pale, sweating face with cold tap water, before filling a glass to take a drink. 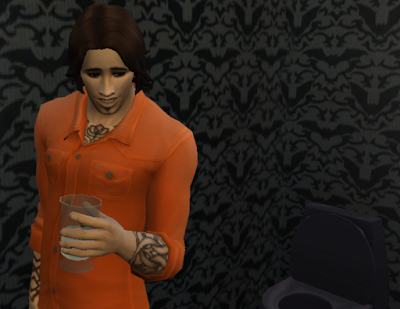 After a few sips, he put the glass aside, and tightly grasped the sides of the sink, watching his own nervous reflection in the mirror - the Narcissus replaced by a ghostly phantom.

His mother had no idea how wrong she was. Marcel was going to pay for what he had done. Karma had come back to bite him in the ass big time. A mysterious event some weeks prior, followed by the trip to the doctor's office a few days ago, had resulted in a life-changing revelation... something that would completely put him on par with the five women he had so callously used and dismissed. In particular, his heart broke for his dear Lillie - who had been dealt the cruelest blow of all.

All the same, on top of everything else they'd had to take in today, on what was supposed to be a happy return from their honeymoon, how the hell could he tell his parents now that the person carrying the latest Miskin baby... 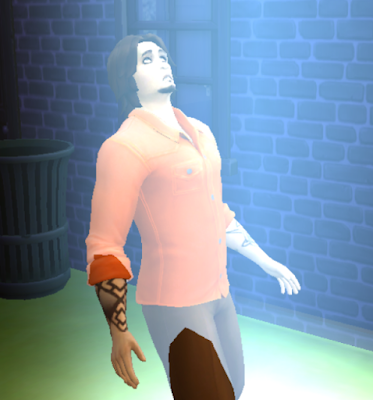