As time went on, Roxy continued to spend most of her time at the police station, and paid little notice to her son. On Marcel's first morning of school, it was Mac who fussed over him and took the numerous photographs: Roxy merely said a hasty goodbye as she ran out for the carpool.

Unfortunately, as opposed to living in blissful ignorance, Marcel was all too aware of his mother's absence in his life. As a means of comforting himself, he spent his evenings and weekends in a creative trance - drawing, painting, and crafting various pieces of artwork.

Mac, who was pleased as punch with his son's obvious artistic talents, hung these masterpieces up in the nursery - believing that Roxy might eventually notice them and comment on them. She never did. Still, Marcel never gave up hope, and he continued to colour and sketch away... until, within a few weeks, every wall of the nursery was covered with his creations. 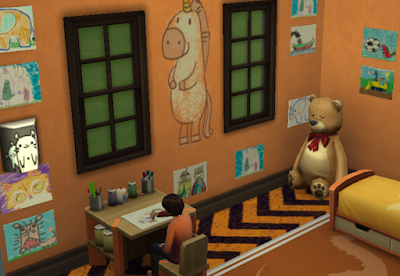 Mac did his best to keep Marcel happy - chatting with him, playing with him, and devoting almost every waking moment to his well-being - but in the end, even his best efforts were no substitute for a mother's affections. 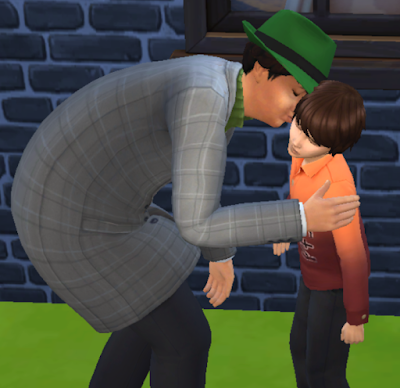 With her husband now gone, Zara's loving heart took a firm focus on her grandson... and it was clear to her how much Roxy's actions - or rather, the lack of them - were hurting Marcel's feelings. She knew that her own time on Earth was running out, and she was determined to get this problem sorted before her appointment with the Reaper.

One evening, Zara and Mac sat together in the living room - both watching the front door, their demeanour cool and determined. After a few minutes' wait, it swung open widely as Roxy strode in following another day at work.

Suddenly, she spotted the stone-faced mother and son glaring at her from their seats on the sofa. Bemused, she stopped dead in her tracks.

"Sit down, Roxanne," Zara told her bluntly. "We need to talk."

"''Roxanne', huh?" Roxy chuckled. "Ooh! Must be something serious!"

Roxy stopped laughing at once. Immediately, she took a seat opposite Zara and Mac. 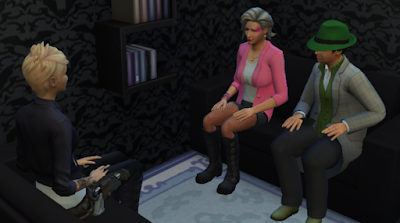 "OK," she muttered, "so you're not playing around. What's going on, then?"

"It's Marcel," Mac told her. "Look - when we had him, we said nothing was going to change between us. That we would stay equals."

"Well, how the hell are we equals now?" Mac snapped back. "I've all but given up my career to take care of him! I've practically raised him single-handed! Once you gave birth to him, that was it as far as you were concerned!"

"I wanted a career. You've always known that, Mac."

"Maybe so - but still! Bringing Marcel into the world was your idea in the first place. Don't get me wrong, I thank God that he's here everyday, but you shouldn't have suggested such a thing if you weren't ready for the responsibility!"

"You wanted a child! Besides, I work my butt off to bring in money for this family! If that's not responsibility, then what is?"

"Well, anyway, this isn't about me," he said, hastily changing the subject. "This is about him. You need to start paying attention to Marcel, Roxy. He's heartbroken. He simply doesn't understand why you don't love him."

"Then why don't you show him that love once a while?" Zara chimed in. "Never in my life have I seen a mother who ignored her own child so much. You barely even acknowledge he's alive! Why? There must be a reason!"

"Here we go again!" Mac uttered. "That's all you ever say! How the hell will we ever understand if you don't talk to us about it?!"

Roxy had had enough. Scowling, he pointed at Mac in an accusative manner, and yelled her emotional response. 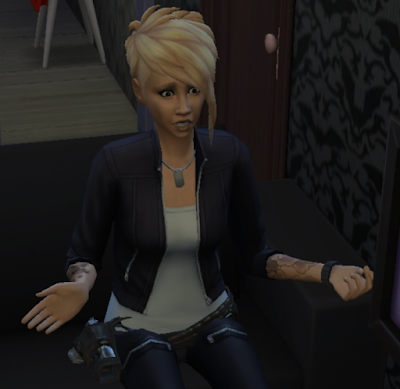 "I am sick of losing everyone I've ever loved!" she cried. "My mother and father doted on me when I was little. Look what happened to them. My aunt and uncle took me in. But I can't stop them ageing. Their time will come soon. You and I became best friends. I nearly lost you to a bloody bullet."

Her shoulders began to shake as she spoke. Tears formed in her eyes, which she hastily blinked back.

"Everyone I get close to ends up getting hurt. It's a curse. A vile, hideous curse. Marcel's doing fine because I'm not involved in his life. He's safe. I want him to stay that way. Yes, he may not understand. Yes, he may hate me when he's older. But as much as I love him, and as hard as it is for me to ignore him... I know I'm doing the right thing. I'm not keeping my distance because I don't love him... I'm doing it because I do."

Slowly, she broke down - her voice cracking with sobs as she clenched her hands into tight fists in her lap.

"And it's so goddamn hard!"

Mac immediately dropped his stone-cold act. Rushing forward, he knelt at the feet of the weeping Roxy, embracing her as tightly as he could.

"Our son will always be safe," Mac told her, stroking her hair comfortingly. "Safe and happy. I promise you that, Roxy. But one thing I know for sure is that he'll be a lot happier with you in his life."

"Nothing bad will happen to him," Mac added. "I swear it. Yes, fate has done some very cruel things to you... but none of it was your fault. You mustn't blame yourself for any of it, and there was nothing you could have done to change things. Right here, right now - your son needs you. And it's clear to me now that you need him, too."

Wiping away her tears with her jacket sleeve, Roxy looked up at Mac, and nodded.

As Roxy hovered in the open nursery doorway, she was memorised by the sight of several dozen drawings all over the orange-papered walls.

"Marcel drew all those?" she whispered to Mac.

At that very moment, Marcel was seated at his little art table, slaving away and shaking glitter all over his newest project. Anxiously, Roxy cleared her throat, and stepped into the nursery. Hearing the noise, Marcel put down his stationery, and turned to see what was happening.

Roxy had no idea how to begin.

Marcel grinned from ear to ear. Sighing, Roxy slowly got to her knees on the nursery floor, allowing her to speak with Marcel on an equal level. 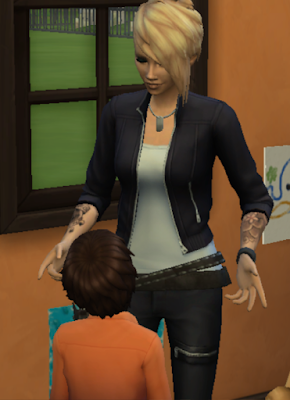 "Look, Marcel," she whispered, "I know I haven't always spent as much time with you as  should have. I know you probably think that I don't care about you very much."

Marcel hung his head sadly, remembering those feelings of rejection.

"Well, I want you to know that's not true," Roxy told him. "I love you, Marcel. Ever so much. It's just that, sometimes... well, I struggle to show it. But from now on, I'm going to do my best. I promise to be there for you whenever you need me."

She outstrecthed her arms slightly.

"Will you forgive me?" she asked. "For hurting your feelings?"

Marcel instantly launched himself into his mother's arms. As they held each other tightly for the first time, both mother and son thought their hearts would burst with happiness. 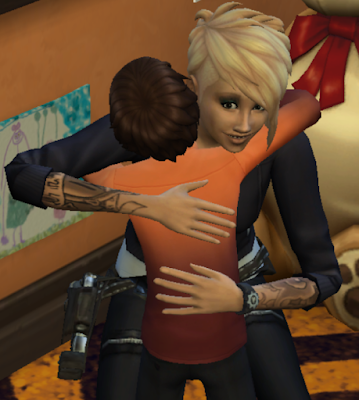 She did so three weeks later.

Her death was sudden, but swift and peaceful. She had gone out for a walk in the garden, as she often did in the evenings, and had stopped to pick an apple from Mordecai's old tree. After taking one bite, Zara felt overcome by a strange coolness, and swooning, she tumbled onto the dewy grass beneath her... the apple rolling away across the lawn. 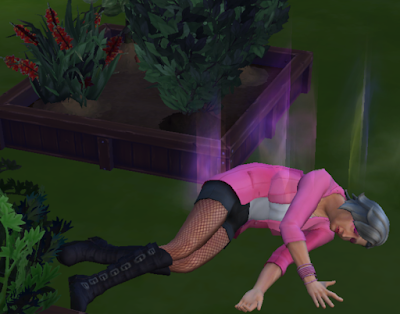 When Mac discovered her there some moments later, his scream was heard by both his friend and his son - and all three of them were suddenly plunged into overwhelming grief. 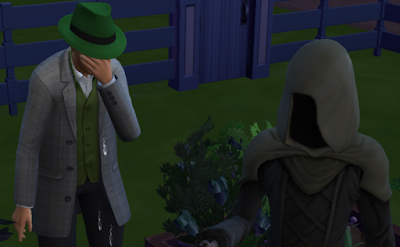 The inquest would later reveal that the apple had in no way contributed to Zara's death. She'd simply suffered a major stroke at the exact same moment. Still, for a woman with such a colourful history and character, it seemed rather fitting that she had died in the manner of a fairytale princess.

Her final resting place was not a glass coffin... but at the side of her dearest Milo - her intergalactic Prince Charming - in the Miskin family graveyard. The tale of their unique, sparkling love had finally come to an end... and Mac could only hope that, somewhere, they were playing out their own Happily Ever After. 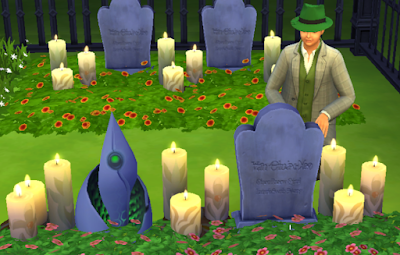 After all, that was something he knew he and Roxy would never have.

Still, at the very least, Roxy was finally spending time with their son... and she was as good a friend to Mac as she had ever been. Following Zara's funeral, Mac spent the days moping around the house, unsure of what to do with himself. When Roxy saw his sadness, she asked him if there was anything she could do to help him.

Grinning, she took hold of his hands. 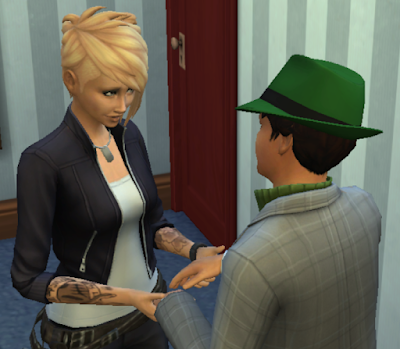 "After all... we belong together."

Leaning forward, she graced his cheek with a gentle kiss. 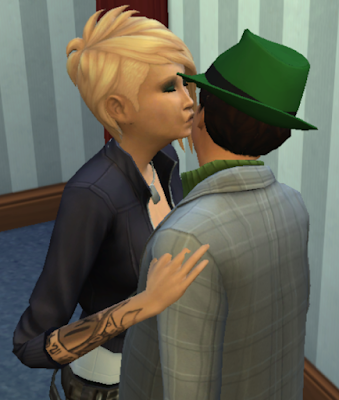