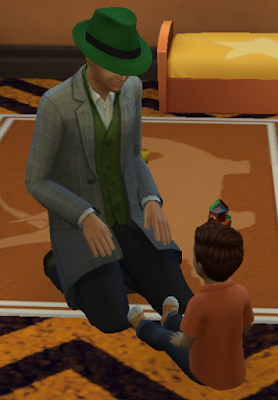 Mac absolutely treasured his young son. When Roxy expressed a wish to return to work as soon as possible, Mac agreed to drop some of his own work hours to ensure Marcel was taken care of. In fact, Roxy was back at the station only three weeks after Marcel's birth... meaning it was Mac who primarily looked after the young one during his early days.

And most of the days since.

It would be unfair to say Mac was in this alone. His mother and father, who had both retired from their respective jobs, did all they could to chip in and help him out. However, it struck him as odd that the mother of his child seemed to take little interest in the life they had created.

Roxy didn't completely ignore Marcel. She cuddled him, on the odd occasion, and maybe prepared one meal for him a week. However, the majority of the childcare duties appeared to have been left exclusively to Mac - whether he liked it or not. In the mornings, when Mac was busy waking Marcel, feeding him and dressing him - hoping that Roxy might hang around for a minute or two, just to help him out a bit - the fiery young lady would already be halfway out the door, shouting her goodbye.

Now, Mac was a patient man who tried to be considerate of others. However, by the time Marcel had reached his toddler years, he had become pretty fed up of Roxy's absenteeism. One evening, when he was especially tired after dealing with a very fussy Marcel all day, he approached Roxy in the living room, demanding to know why she refused to spend hardly any time with her son.

Her answer was vague, but firm and spoken with confidence.

Before Mac could pursue the matter any further, Marcel woke up suddenly and began crying out - presumably having had a nightmare. Mac looked at Roxy, thinking she might respond... but, of course, she didn't make a move.

Sighing, Mac headed into the nursery, calmed his son, and began to read him a bedtime story to help him settle back into sleep - all the while pondering Roxy's bizarre response to his question. 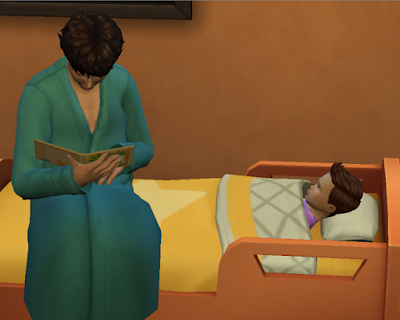 Zara, like Mac, was greatly concerned about Roxy's apparent refusal to bond with her child. However, she sadly had a more pressing issue on her mind.

Recently, Milo appeared to have become unwell. It had started in the smallest of ways - some extra tiredness at the end of the day, the occasional shortness of breath whilst walking... little ailments like that. But as the weeks went on, her beloved seemed to become more and more exhausted. Two months after the initial signs of his illness, he became unable to even leave his bed. So, in addition to looking after her grandson, Zara was now also her husband's full-time carer.

One morning, as she was bringing him his breakfast on a tray, Zara found Milo lying in their bed, as usual. Today, though, his eyes had a glazed look, and his breathing seemed to be especially shallow and laboured.

Suddenly nervous, Zara called Milo's name. He could only whisper hers in response. 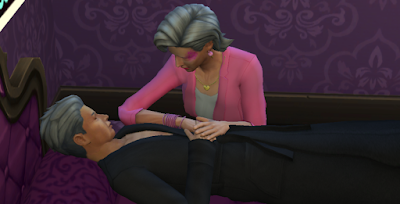 Putting the tray down, Zara rushed to her husband's side, taking his hand and examining him carefully. His chest was moving up and down rapidly as he gasped for breath. His grasp on Zara's hand was weak, his palm clammy and cold.

His time was drawing near.

Terrified, Zara rushed out into the hallway, and screamed for Mac desperately.

Downstairs, Mac was helping Marcel build a tower with his wooden blocks. Hearing his mother's piercing cry, he stopped, quickly kissed his son's brow, and then ran upstairs as fast as his feet could carry him - entering his parents' room to find his father bedridden and gasping, and his mother sat beside him, looking up at her son with tears in her eyes. 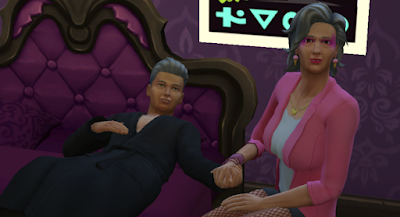 "Mac," Zara told him softly. "Please... sit beside your father. He needs you right now."

Immediately, Mac obediently took a seat at the other side of the bed, reaching out to hold his father's other hand. With great effort, Milo groaned and turned towards him, looking up at Mac with tired, half-closed eyes. 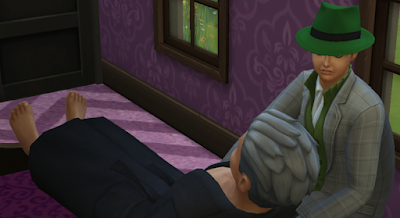 "As a doctor, you have helped to save countless lives," she told him. "As a husband, you have been loving and devoted. As a father, even more so. So yes, Milo. You have done enough, my darling. More than enough."

Mac nodded in agreement - blinking back his own tears. 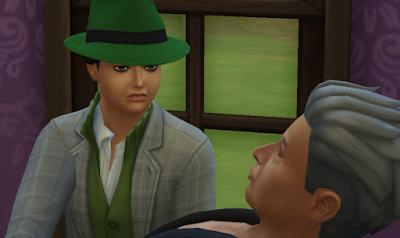 Smiling softly, Milo fell back against the bed pillows.

"Thank you," he said gratefully. "That's good to know."

He groaned suddenly as a sharp pain surged through his body. As he recovered, his human disguise dissolved away slowly, never to return - revealing his pale, purple-skinned fragile frame to the world.

Milo Miskin had entered this world as an alien. Clearly, he was going to leave it in the same way.

"All my life," he continued, "I... I have had dreams of a distant place. A world far away from here, filled with many marvellous things that we on Earth have never seen. And I have heard the voice of a woman, singing to me and soothing me in my sleep. The voice of my true mother."

Zara choked back an anguished sob.

Slowly, his eyes began to close for the last time

As the sun set that evening, Milo was laid to rest in the family graveyard. 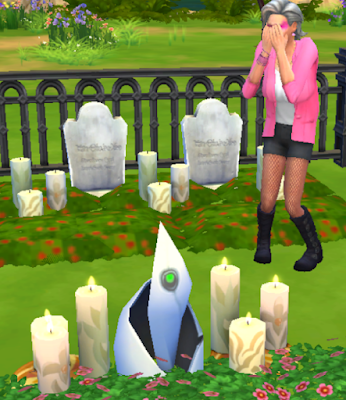 In accordance with his last wishes, Milo's tombstone was not the typical slab monument. Instead, it was an artistically carved monolith: one inspired by myserious ruins found in the desert that some researchers believed were of alien origin. Milo, having read about this discovery in a magazine, had stipulated in his will that he wished to be buried beneath such a structure, allowing him to be symbolically close to his mother's planet whilst lying interred in the ground of his father's.

Miskin tradition was also accounted for. Milo's grave was heavily adorned with candles and flowers: the violet blossoms watered by the tears of the grieving widow and son. 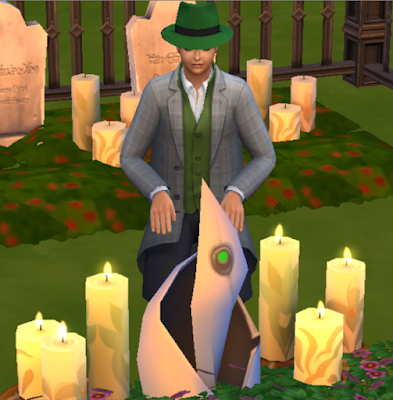 When Roxy arrived home from work and learned of Milo's passing, she, too, was moved to tears. Putting her recent emotional distance to one side, she embraced both Zara and Mackenzie, sharing their sense of loss, and doing her utmost to comfort them. 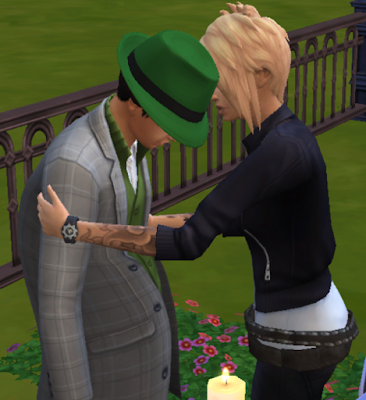 Later that night, as Mac tucked Marcel into bed, he threw his arms around his young son, and held him especially tightly - gravely dreading the inevitable day that he, too, would leave his child's life forever.
Posted by Little-Red-Hat at 12:40