Within a few weeks, Mac was in perfect health, and able to return to work. The Chief decided to keep him off active assignments for a while - just to give him a chance to settle back into things slowly. Everyone in the station was glad to see him back, and he spent a great deal of his first day just talking to everyone and reassuring them he was all right.

That said, the two detectives weren't completely out of the woods yet. Time would tell if Roxy would be charged for shooting the kidnapper - unreasonable force, that sort of thing. However, when the culprit, Jared Mullin, had himself recovered from his injuries and was finally called to court - the night's events laid out before the jury - it was decided that Roxy had acted in self-defence. Mullin, by his own admission, had fired first: a potentially lethal shot at Roxy, which Mac had bravely taken on her behalf. In the court's view, therefore, Roxy's response was utterly justified.  An understandable action in the line of duty.

Mullin pleaded guilty to theft, kidnapping and attempted murder... and despite naming his fellow burglars as part of a plea bargain, he was sentenced to thirty years in prison. Justice had been done.

After his first day back at work, Mac headed home feeling happy, but rather worn out. As he stepped into the kitchen, he spotted two rather unusual things.

One, Roxy was already back.

Two, she was cooking something. 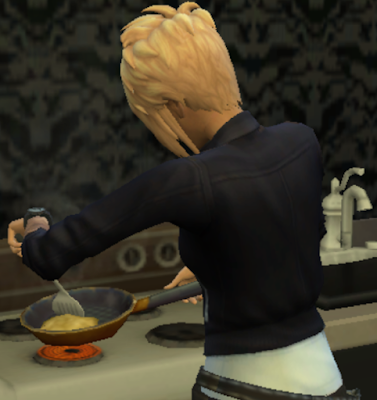 Roxy never cooked. Most of the time, Zara still made the family's meals, or else, Mac himself would don the chef's apron. Roxy, for the most part, lived off microwavable meals and takeaways. Yet, here she was, whipping up something in a frying pan - occasionally pausing and cussing violently as she scraped the sticking food up with a spatula.

Upon noticing Mac, she gestured towards the table.

Curious, he sat down at the table as requested.

"They've gone to Miranda's for the evening," Roxy replied. "Poker night, or something. They won't be back until tomorrow."

After a few moments, Roxy plated up her food into two servings, and brought it over - passing one to Mac as she settled down with her own.

The meal, by far, was not the best that Mac had tasted. Eggs and bacon weren't exactly cordon-bleu cuisine. On top of that, the eggs were runny and the bacon was slightly burnt. However, he appreciated how hard Roxy must have worked to put together this unfortunately mediocre fare. Not wanting to hurt her feelings, he gritted his teeth, smiled, and did his best to savour the food slowly.

Perhaps some conversation would help distract him.

"I had a word with the doctors before I was discharged," he told Roxy.

"Yeah. About you and me having a baby."

"There's this procedure they can do. Basically, they collect my sperm first, and then they - "

Roxy slammed her knife and fork down on the table sharply.

"Mac. Please. Not over dinner."

After they had finished their meal, Mac got up to clear the plates - but Roxy stopped him, gently pushing down on his shoulders.

"To help you relax," Roxy added, "I've run a bath for you upstairs. I used piping-hot water, so it should just be at the right temperature now. Why don't you jump in, and I'll talk to you afterwards?"

Mac smiled, touched by her gesture.

"Nonsense. You take you time."

As Roxy got on with the washing-up, Mac headed upstairs. As he entered the bathroom, he saw that the bathtub was filled with bubbly froth... and even a few rose petals. They were certainly a nice touch.

Within seconds, Mac had stripped off his clothes and settled down into the warm, soothing water. Out of the corner of one eye, he saw that Roxy had left one of her mud face packs out on the counter. An innocent mistake, no doubt... but still, he'd always been curious about what they were like.

Meh. What the hell. 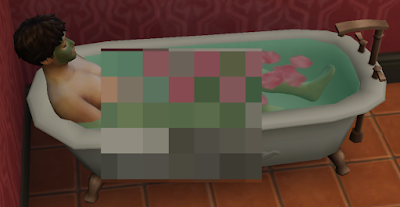 After blissfully unwinding for fifteen minutes or so, Mac washed the mud off his face, dried himself off, and clad himself in his dressing gown and slippers before heading into the corridor.

Roxy was there waiting for him.

And Mac couldn't take his eyes off of her. 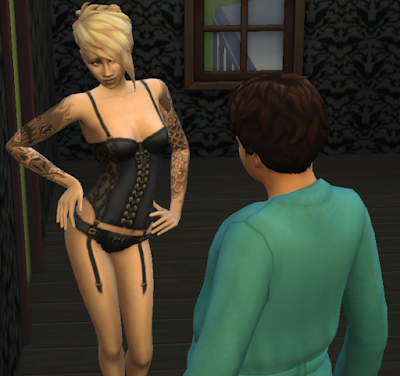 Roxy leaned against Mac's bedroom door, clad in sexy lingerie - a flirtatious look blazing brightly in her eyes. Mac stood before her, frozen to the spot - his heart pounding in his chest like a jackhammer, his own eyes like those of a rabbit caught in headlights.

Mac swallowed nervously, and tried his absolute hardest to respond.

It was no use. He'd been transformed from confident detective to a jabbering fool. Roxy stepped towards him, reaching out her arms to stroke his body playfully.

"I'm going to keep my promise, Mac," she said. "But I am not going to a hospital. No more operations, no more doctors. Not now. Not ever. If you and me are going to have a baby... we're going to do it the good old-fashioned way. And now's the perfect time."

With those words, she kissed him. 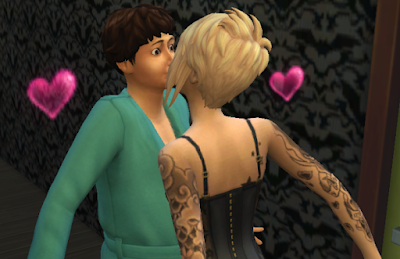 As she pulled away, Mac inhaled deeply - desperate to restore the breath that Roxy had just stolen from him. Meanwhile, Roxy took hold of his hands tenderly.

"There's just two things," she said. "First of all, you have to understand that this doesn't make us a couple. OK?"

"Second -  nothing is going to change between us. We're equals now, and we'll stay equal when the baby's here. Agreed?"

She was silenced suddenly as Mac threw his arms around her, pulling her forward into a deep and passionate kiss. 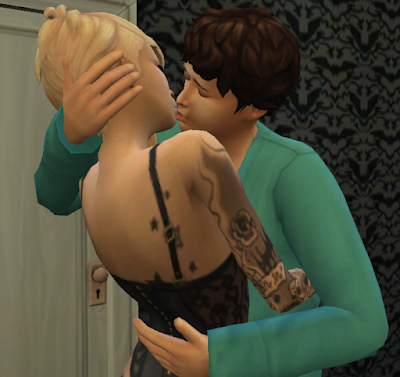 Early the next morning, Mac stirred in his sleep as sunlight shone into the room.

Last night had been the most amazing night of his life. Until then, any notions he'd had of Roxy "wanting" him, kissing him, making love to him, had been strictly confined to the realms of fantasy. Last night, however, his dreams had become reality. 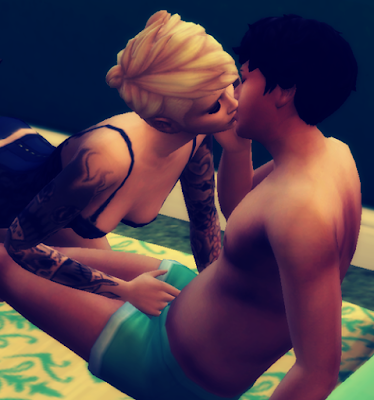 With Roxy firmly in the driver's seat, the pair had explored each other's bodies lovingly and tenderly, eventually resulting in an overwhelming bliss - a pleasure that Mac had never experienced before. 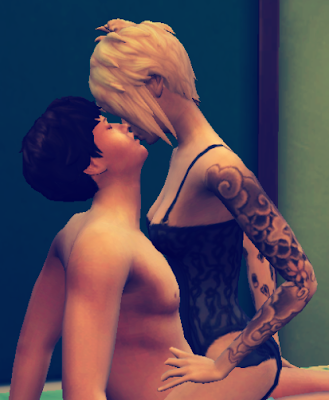 As he began to awaken, he smiled at the newly-made memories going through his head, and rolled over to embrace Roxy one more time.

His hands, however, merely fell onto a empty spot.

Alarmed, Mac jolted awake, sitting bolt upright in bed. Roxy wasn't there beside him. In fact, she wasn't anywhere in the bedroom. His bliss replaced by a nervous unease, Mac pulled on his dressing gown and headed downstairs.

Eventually, he found Roxy in the living room - fully dressed, and lacing up her boots. When she noticed Mac come in, she greeted him casually.

"Morning, Mac. Come on, you'd better get dressed. We'll be late for work."

Mac was stunned. Was that it? After everything they'd experienced last night, all Roxy had to offer him now was some blasé comment? Didn't it mean anything to her? Didn't she care?

"Course I did. I just don't see any reason to make a big deal out of it, that's all."

As Mac contemplated this, Roxy's own words from the previous evening came back to him.

"Nothing is going to change between us."

Ah. That explained it. Roxy had agreed to give Mac a child - that was all. She wasn't interested in this becoming a regular thing. She'd made it very clear that, despite everything that had happened, and despite the ever-growing bond between them, she still had no interest whatsoever in the two of them being together. On top of that, last night hadn't exactly been her first time... although it had been his.

Then again: couple or not, at least Roxy was still here - still in Mac's life, with no intention of going anywhere.

And better still, a few weeks later... it became clear that she would be keeping her promise after all. 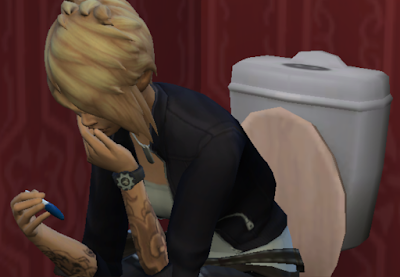 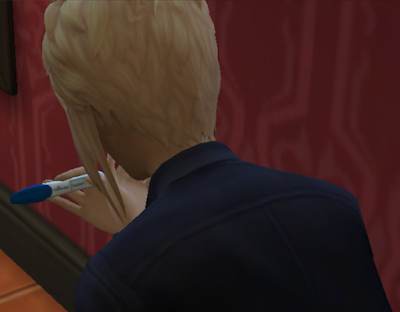