When Mac failed to emerge from the house after ten minutes, the Chief of Police quickly realised that something had gone wrong. His next move wasn't going to be an easy one to make - but there was only one person he could depend on now.

As he'd anticipated, Roxy's reaction to his news wasn't exactly cool and collected.

The Chief accepted Roxy's screaming rant as it flew out of his mobile phone speaker. He could understand her anger. Yes, he'd meant well... but ultimately, he'd made a big mistake.

"Rhodes," he said, once Roxy had apparently paused for breath. "I am very sorry for the hurt and distress I've caused you. Believe me - that wasn't my intention. But right now, I need you to do your duty. It's still possible - "

"Probable that your aunt, uncle and Officer Miskin are safe. You can still rescue them. I know you can handle this."

As the Chief awaited a response, he heard a dark chuckle.

"Oh yes, sir," Roxy told him. "I can handle this. And do you know what I'm going to do to those perps when I find them?"

Within the hour, Roxy had arrived on Solomon Street - in plain clothes, just like Mac before her. She was drawing heavily on a cigarette: presumably to calm her nerves, or otherwise, ease her anger. 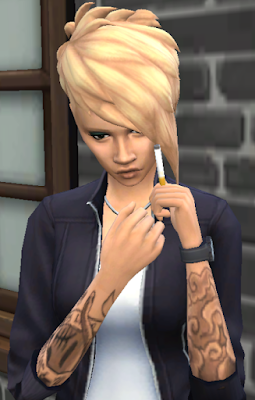 However, Roxy had one thing that Mac hadn't. A gun. Loaded, and ready to fire.

"Did you have to bring your weapon, Rhodes?" the Chief asked her.

The Chief decided not to press the issue.

"The little house at the end of the street," he told her. "Mac was last seen heading into the basement. You're the best chance we have now. Good luck."

When Roxy arrived at the house, she knew that rushing in wasn't the wisest move. Instead, she hovered around the basement hatch for a while... which was still open. As she perched on the lawn carefully, waiting for an opportunity, she overheard the conversation below.

"Come on, Rhodes. I know you're the richest man in this damn city. Just tell me your bank details, let me grab a few million, and you'll be on your way."

"I'm not giving you a thing, you hoodlum!"

"You tell him, Richard!"

The sound of groaning followed... and then, a sharp laugh.

"Well, well, well. Looks like our detective friend is awake. Hello, Officer Miskin. Oh yes... I recognize you. Your family isn't short of the moolah, either. Welcome to our little hostage situation. I'm sure your mummy and daddy will pay handsomely to see you again."

Roxy saw red. The final straw had been broken. Reaching into her holster, she stormed into the basement, raced up to the attacker, and pointed the gun directly in his face.

Her niece didn't acknowledge her. She had other things on her mind. 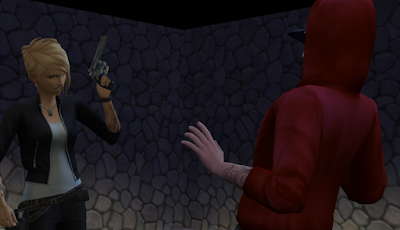 "All right, scumbag," she hissed to the kidnapper - her voice low and sinister. "You have two choices. Let them all go now and give yourself up... or leave this basement looking like Swiss cheese."

"Really, cop?" he cackled. "Is that the best you've got? Dumb threats and that little peashooter?"

He reached towards his hip.

"Let me show you what a real weapon looks like..." 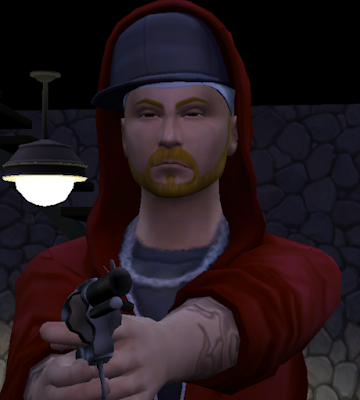 As the kidnapper drew out his pistol, Mac raced forward in a sudden movement - desperate to protect his friend. 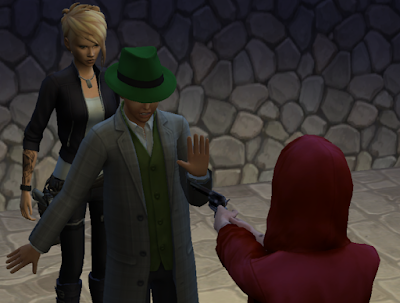 A loud bang. A brief but bright flash. The bullet flew from the chamber and soared forward at high speed - piercing Mac's chest.

With an agonizing wail, the young detective fell.

Lavinia screamed in horror. Richard turned away, unable to look. The kidnapper, meanwhile, shivering and shocked that he had actually fired, now had his eyes fixed on Mac in alarm.

Deep down inside Roxy, a volcano of emotions began to erupt. Fear. Sadness. Overwhelming rage. Stripped of all powers of speech, she could only let out a fierce roar as she aimed her gun at the kidnapper's knees and swiftly returned fire... refusing to stop until she'd emptied her weapon. 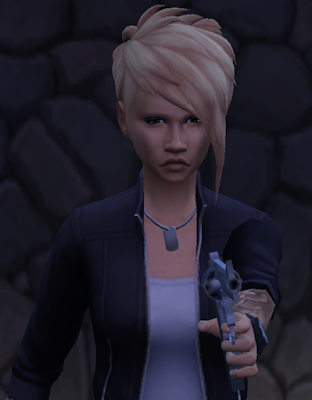 The hoodie-clad crook rolled wildly on the floor, screaming - his blood flowing down his trousers like rainfall. As Richard wrapped his arms around the shaking Lavinia for comfort, Roxy turned her attention to her dearest friend: now laid on his back on the ground beside her, desprately fighting for each laboured breath.

Seeing him stuggle like this brought tears to Roxy's eyes. Kneeling beside him, she interlocked the fingers of one hand with his, using the other to clasp his cheek tenderly - striving to push away the terrifying thoughts racing through her head.

Mac curled his fingers inwards, tightening his grasp on Roxy's hand. As he looked up at her, his eyes appeared glazed - his gaze distant.

"Sssh!" Roxy whispered. "Save your strength."

Wincing with pain, Mac slowly moved his and Roxy's clasped hands closer to his body... bringing them to rest over his heart. 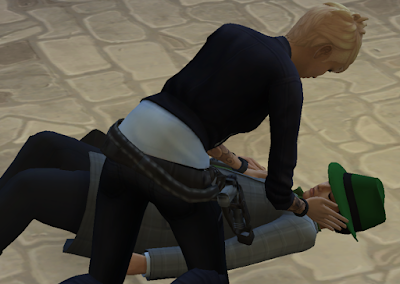 With this words, Mac closed his eyes, and once again slipped into darkness.

Roxy shook her head wildly, unable to cope with what was happening. Still gripping Mac's hand in hers, she pulled it about frantically in a desperate effort to rouse him.

As Roxy burst into anguished floods of tears, police officers suddenly swarmed into the basement, yelling and brandishing weapons - the Chief having called for backup immediately after hearing the first gunshot.

As three officers dragged away the wounded perp, and a kindly female cadet went to check on the Rhodes, Roxy grew nervous as she spotted several of her colleagues approaching herself and Mac. Panicking, she wrapped her arms around her friend - doing her best to shield his body with her own.

She knew what they wanted to do.

She couldn't let that happen.

Ignoring her frantic plea, an officer pushed Roxy aside as the group quickly gathered around Mac to check the damage.

"He's been hit," the ringleader said. "Badly. We need to get him to a hospital. Now."

Acting out of blind panic, she desperately tried to pull her colleagues away from the unconscious Mac - forcing two officers to grab her by the arms and restrain her. As she vainly struggled against them, she could only stand there and watch helplessly as Mac was lifted up by his fellow officers and taken away.

"Get him to the general hospital," one said.

"No," Richard Rhodes called out. "Take him to the private one. St. Benedict's. He'll get the best possible treatment there."

"Sir," the officer told him, "he doesn't have that kind of healthcare plan."

"Forget the cost," Richard snapped back. "I'll take care of that. Just get him there - fast."

As Roxy looked on, tears still streaming down her face, a villianous voice in her head - like a demonic conscience - kept muttering a dastardly phrase... its words running through her brain repeatedly like a replayed record.

If he goes in there, he'll never come back.
Posted by Little-Red-Hat at 14:00