Milo sat at his desk in his bedroom, working on his extra credit Maths and Science assignments. It was an enjoyable task to him... and not only because the subject matter was interesting. His heart was joyful and light with love, and he hummed a happy tune as he worked.

Meanwhile, in her neighbouring room, Miranda heard the happy melody floating in through the wall as she lay on her bed. She hadn't slept well. Despite her conversation with Zara on the subject, she was still greatly concerned for her brother's well-being, and had severe doubts about the sincerity of his new sweetheart.

It was no use. She had to say something.

Sighing, she sat up slowly, and knocked on the wall.

Intrigued, Milo put down his pen, closed his books, and headed over. He found Miranda standing in her bedroom doorway.

"Sit down," Miranda said, gesturing to her bed.

Milo did as he was asked. Miranda closed the door behind him, ensuring they could talk in private without their parents or Rosie's little ears overhearing.

"It's about Scarlett," Miranda explained. "I know you don't like to meddle in school gossip, but let's just say that she... has something of a reputation."

"For screwing people over."

"She likes to humiliate people. Embarrass them. It gives her some sort of cheap, sick thrill. And, well.... this whole dating thing, with you... I think it might just be another game of hers."

Milo heard his sister's words - but his brain, logical and wise as it was, refused to process them.

"Honestly, Milo, I'm not. I wouldn't do something like that to you - but Scarlett would. I just know she's going to hurt you one day." 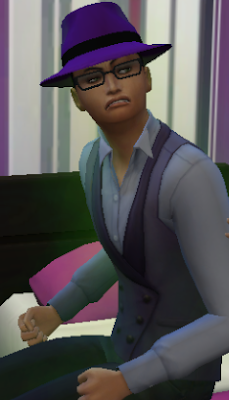 Miranda was taken aback by Milo's sudden outburst. In their entire lives, she'd never seen him react to something like that before.

"You're just jealous!" Milo continued, his anger now apparent. "You're just trying to split me and Scarlett up because you don't have someone of your own!"

"I don't care what any of your stupid friends have told you! I love Scarlett, and she loves me! I know that as much as I know my own name!"

"Fine!" Miranda snapped back, her patience having finally run out. "Do and think whatever you want! But don't say I didn't warn you! Because, trust me, that girl is bad news!" 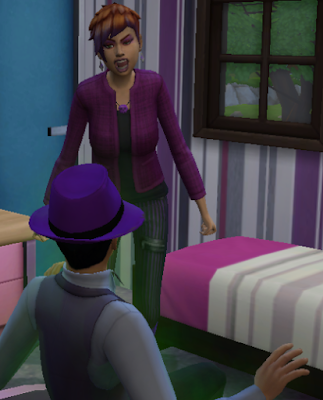 Outraged, Milo rose and stormed out of the room, slamming the door shut behind him. Miranda, shaken and troubled, fell face-down onto the bed, buried her head into the pillow, and screamed out her frustration.

It was hopeless. There was nothing she could do for her brother now.

That afternoon, Milo met Scarlett for their fifth date: a simple walk in the park. It was a sunny day, and he thought that a beautiful young lady like Scarlett might appreciate seeing the beauty of nature around her. And indeed, whilst she, by all means, appeared to be enjoying the excursion, he seemed more distant - more distracted.

As the couple sat side by side on a bench, Scarlett turned to her paramour. 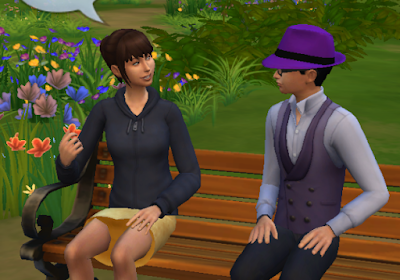 "Is something wrong, sweetie?" she asked. "You look upset."

"Oh, it's nothing, really," Milo answered. "Just - something stupid that someone said. That's all."

"Oh, just some dumb gossip... they think that you're only going out with me to humiliate me. Don't worry, though - I know they're wrong. You're not like that at all."

Grinning, Scarlett snatched Milo's hand, and pulled him up from the bench. She drew him into a tight embrace, then stroked his cheek tenderly.

"I wouldn't do a nasty, horrid thing like that! You trust me, don't you, honey bunny?" 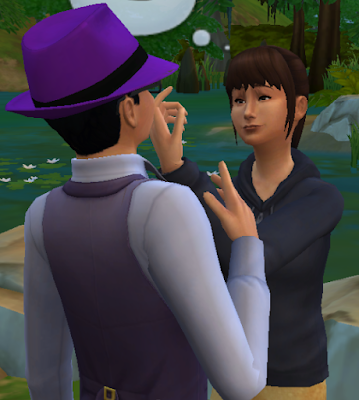 Slowly and cautiously, he leaned forward, and allowed his lips to meet Scarlett's. 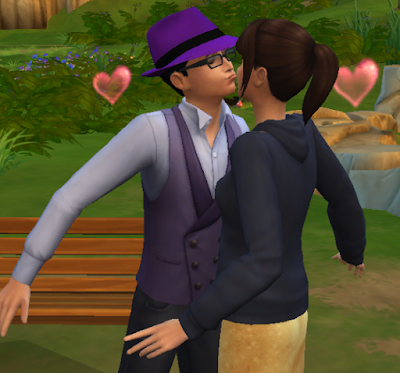 Scarlett, stunned, jumped back as a instinctive reaction... much to Milo's shock. When Scarlett noticed how upset her admirer was by her response, she instantly went back into character - giggling coquettishly and playing with her hair.

Milo's mouth stretched into a mile-wide smile. Feeling cosy and content, he looked deeply into Scarlett's eyes - his own blazing bright with affection and romance.

He knew the moment was right. 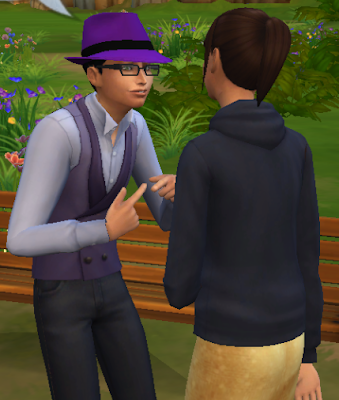 "Scarlett, my love," he said, "there is something you need to know about me. Something important. I've wanted to tell you for weeks, but I didn't know if you were ready. Now, I'm sure that you are."

Stepping back, Milo posed in a grand, proud fashion... and allowed his human exterior to dissolve away, revealing the purple alien body beneath. Keenly, he looked towards his sweetheart, desperately awaiting her reaction.

It was one of horror.

Scarlett, shaken to the core, had started to stagger backwards away from Milo - her hand raised, a finger frozen into a pointed gesture. Soon, this fear was replaced by anger and disgust. Overwhelmed with disdain, she managed to stammer out a few coarse words. 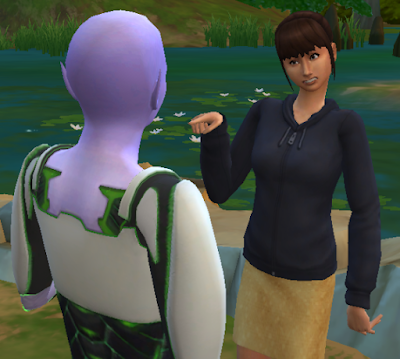 "You're... you're a freak!" she screamed. "A monster! My God, I thought you were a weirdo before, but now? Jesus! You're disgusting!"

Deep inside his chest, Milo felt his heart being ripped into pieces. Gingerly, he moved towards Scarlett, a hand outstretched in a friendly manner.

"Don't touch me!" Scarlett shrieked, slapping his hand aside. "Stay away from me! I never want to see you again, you... you thing!" 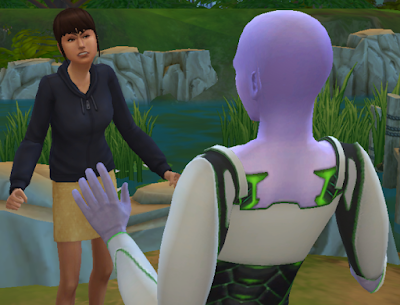 "Oh, shut up, you soppy moron!" Scarlett snapped back. "You didn't really think I cared for you, did you? You're a total geek - and a freak, to boot! And you were still dumb enough to think I actually loved you! I just wanted to show you that you're not as clever as you think you are - you weirdo!" 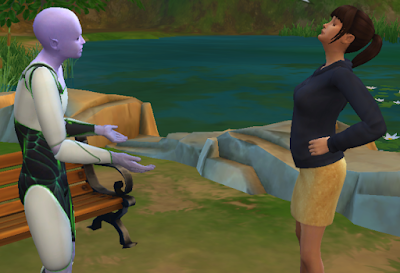 Milo couldn't believe what he was hearing. As Scarlett stood there - arms folded, an arrogant grin on her face - there was nothing he could do to stop the tears from rolling down his cheeks. Choking back sobs, he raised his arm... his palm outstretched towards Scarlett.

"Now what are you doing?" the young woman muttered.

A bright light flashed from out of nowhere. As it subsided, Scarlett stood rooted to the spot - dazed and confused, her eyes staring away into space. In a few moments, she would remember nothing of Milo, nothing of their relationship - and most importantly, nothing about his true form.

Back in the house, Lily was playing with Rosie in the lounge - helping her build her blocks into a fairy princess castle - when this peaceful moment was shattered by the front door being thrown open, and a horrific alien creature lurching into the house: wailing incoherently with liquid pouring from its eyes.

Lily, terrified, screamed for help and grabbed hold of Rosie, tightly drawing the child to her bosom for safety.

"You!" she yelled at this unexpected visitor. "Who are you?! What do you want?!"

"Lied..." the creature gasped between anguished sobs. "She lied to me, Lily!"

Lily knew that voice. Slowly lowering Rosie to the floor, she moved towards the intruder - desperately searching its face for something familiar. 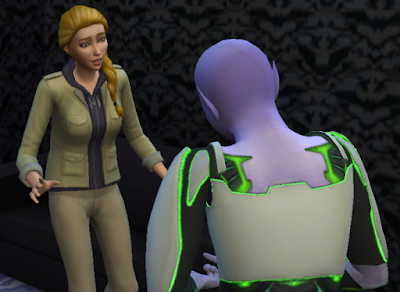 Behind her, Miranda and Mordecai raced into the room, having heard the commotion. Upon seeing the tragic scene that was unfolding in front of them, they both grew very concerned.

"My God..." Lily gasped, looking at the strange, unearthly figure before her. "Milo! It really is you in there!"

"He's not alone," she said... before letting her own disguise slip away. 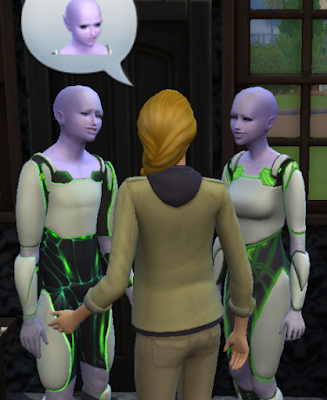 Desperate for an answer, she turned towards Mordecai. 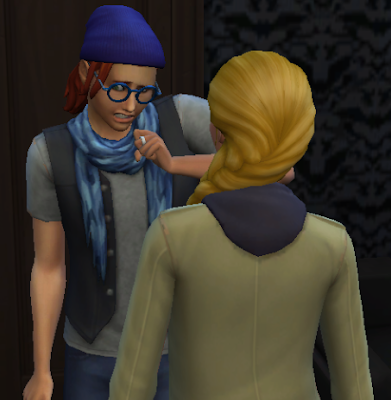 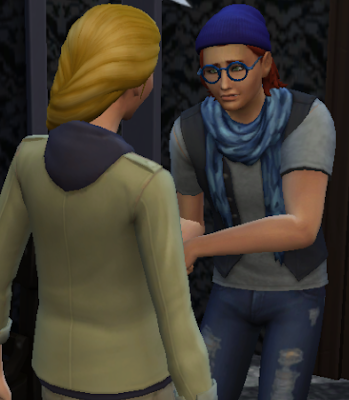 Mordecai immediately revealed everything. About his mysterious intergalactic abduction on his twenty-first birthday. How he had been returned to Earth with two babies growing in his belly. How the strange little scar on his stomach that Lily had often asked him about was the evidence of their bizarre birth. There had been no runaway mother, no spiteful lover in the past... the body that had carried his children had been his own.

Lily had no idea how to respond. Shaking with shock, she felt her knees give way. Mordecai took hold of her shoulders gently and helped her onto the sofa. Kneeling beside her, he grasped her hand tightly in a gesture of supplication.

"Please, my love," he whispered. "Don't hate me for hiding this from you. And I beg you.... I implore you... please don't hate my children."

Lily looked up at the twins - their true forms still on display.

"I've known these two ever since they were toddlers," she said proudly. "I was their nanny, and now I'm their stepmother. They are my family, and I love them as though they were my own. And I always will... no matter what they are or where they came from."

Rising to her feet again - albeit somewhat shakily - she approached Milo, and threw her arms around him in a tight hug.

"Forget about that foolish girl," she told him. "Trust me. You are perfect just the way you are." 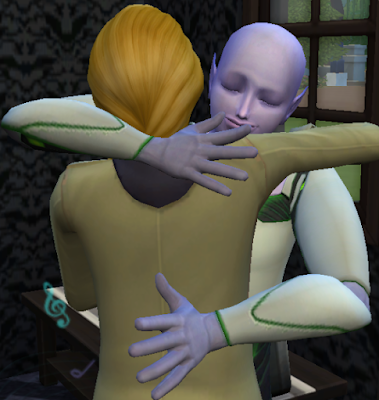 Lily's words were a comfort to Milo... but ultimately, they were not enough to restore him to his former joyful self. Scarlett's actions had hurt him deeply. Feeling weak and overwhelmed, he excused himself politely and retreated to his room, where he immediately buried his head in a book - his oldest friend and his greatest comfort.

Things would remain that way for some time.